You could be the next Seong Gi-hun and win the jackpot!

The worldwide hit show Squid Game is back, not only for series 2, but a real-life adaptation as Netflix introduces 'Squid Games: The Challenge' and is looking for UK contestants.

Netflix is turning "Squid Game" into a reality TV show. Here's what you need to know:

To participate, applicants must be:

With the largest cast in reality TV history, 456 real players will enter the game in pursuit of a life-changing cash prize of $4.56 million. Do you have what it takes to win Squid Game?

For this round, the Front Man is in search of English-language speakers from any part of the world. The stakes are high, but in this game the worst fate is going home empty-handed.

The the popular South Korean drama became successful overnight, becoming the most-streamed show in Netflix history and an insane 1.65 billion view hours in its first 28 days after release. But now Squid Games will be brought into the real world where you can win a life-changing £3.8 million prize.

But no need to worry – if you lose, you won't be carried out in a black coffin. The new reality show will see contestants face some grueling games just like Squid Games, pushing players to the toughest limits. Netflix's 'Squid Games: The Challenge' will mirror the Squid Games by having a huge arena of 456 contestants all battling it out to win the cash prize.

Brandon Riegg, Netflix Vice-President of Unscripted and Documentary Series said about the new reality show: "Fans of the drama series are in for a fascinating and unpredictable journey as our 456 real-world contestants navigate the biggest competition series ever, full of tension and twists, with the biggest ever cash prize at the end.

Netflix says “Squid Game: The Challenge” will have 10 episodes, and it will be filmed in the U.K. Some of its producers from the hit social media reality show The Circle and 24 Hours in A&E behind the works.

If you think you have the nerve and the skill to enter, you can now apply on the Squid Game casting website: www.squidgamecasting.com. Or, if you're just a fan of the show both series 2 of Squid Game and Squid Games: The Challenge will be coming to Netflix in the near future. 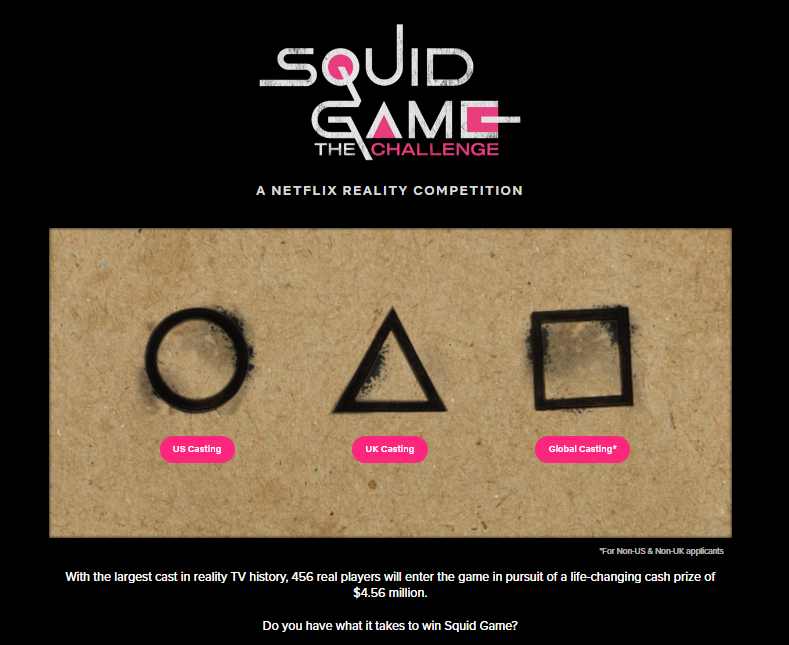