Sri Lanka, an island nation of 22 million, is facing an economic and political crisis, with protesters taking to the streets in defiance of curfews and government ministers stepping down en masse.

Driving the discontent is the worst economic downturn since the South Asian country gained independence in 1948, with crippling inflation sending the cost of basic goods skyrocketing.
Anger, which has been simmering for weeks boiled over, turning protests violent -- and throwing the government into disorder.

Here's what you need to know.

What caused the economic crisis?

Experts say the crisis has been years in the making, driven by a little bad luck and a lot of government mismanagement.

This borrowing spree has coincided with a series of hammer blows to the Sri Lankan economy, from both natural disasters -- such as heavy monsoons -- to man-made catastrophes, including a government ban on chemical fertilizers that decimated farmers' harvests.

These problems were compounded in 2018, when the President's dismissal of the Prime Minister sparked a constitutional crisis; the following year, when hundreds of people at churches and luxury hotels were killed in the 2019 Easter bombings; and from 2020 onwards with the arrival of the Covid-19 pandemic.

But the move backfired, instead hitting government revenue. That prompted rating agencies to downgrade Sri Lanka to near default levels, meaning the country lost access to overseas markets.

Sri Lanka then had to fall back on its foreign exchange reserves to pay off government debt, shrinking its reserves from $6.9 billion in 2018 to $2.2 billion this year. This impacted imports of fuel and other essentials, which sent prices soaring.

Topping all that, the government in March floated the Sri Lankan rupee -- meaning its price was determined based on the demand and supply of foreign exchange markets.

That move appeared aimed at devaluing the currency to qualify for a loan from the International Monetary Fund (IMF) and encourage remittances.

However, the plunging of the rupee against the US dollar only made things worse for ordinary Sri Lankans.

What does this mean for people on the ground?

For Sri Lankans, the crisis has turned their daily lives into an endless cycle of waiting in lines for basic goods, many of which are being rationed.
In recent weeks, shops have been forced to close because they can't run fridges, air conditioners or fans. Soldiers are stationed at gas stations to calm customers, who line up for hours in the searing heat to fill their tanks. Some people have even died waiting.

One mother in the capital, Colombo, told CNN she was waiting for propane gas so that she could cook meals for her family. Others say the cost of bread has more than doubled, while auto rickshaw and taxi drivers say the fuel rations are too meager to make a living.
Some are caught in an impossible position -- they have to work to feed their families, but must also queue for supplies. One street sweeper with two young sons told CNN she quietly slips away from work to join lines for food, before hurrying back.

Even members of the middle class with savings are frustrated, fearing they could run out of essentials like medicine or gas. And life is made more difficult by frequent power cuts that plunge Colombo into darkness, sometimes for more than 10 hours at a time. 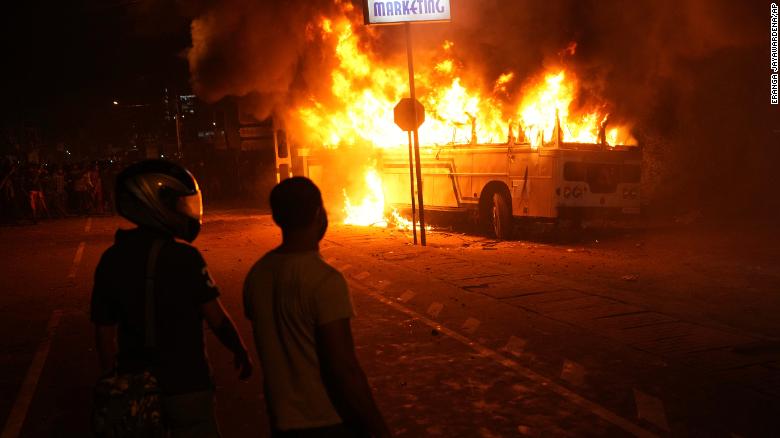 What's happening with the protests?

Protesters in Colombo took to the streets in late March, demanding government action and accountability. Public frustration and anger erupted on March 31, when demonstrators hurled bricks and started fires outside the President's private residence.

But protests went ahead the next day in defiance of the curfew, prompting police to arrest hundreds of demonstrators.

Protests have continued in the days since, though they remained largely peaceful. On Tuesday night, crowds of student protesters surrounded Rajapaksa's residence again, calling for his resignation.

The emergency ordinance was revoked on April 5. 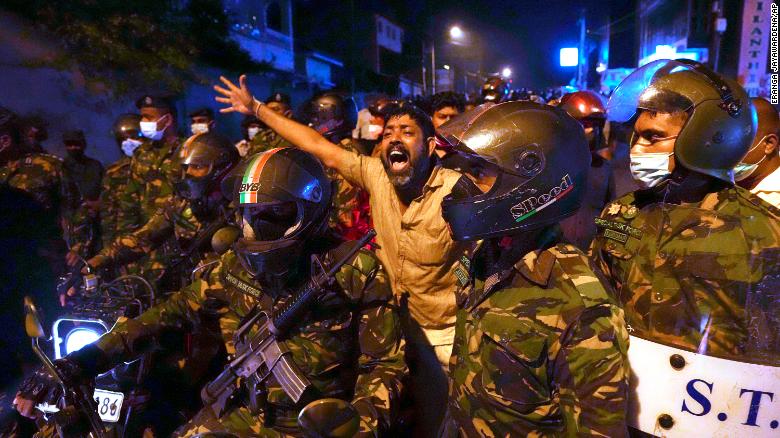 A protester outside the President's private residence in Colombo, Sri Lanka, on March 31

What's happening with the Cabinet?

The government's entire cabinet was effectively dissolved on April 3 due to mass resignations by top ministers.

Some 26 cabinet ministers stepped down that weekend, including the President's nephew, who criticized the apparent social media blackout as something he would "never condone." Other major figures including the governor of the central bank also resigned.

Facing an administration in chaos, on Monday the President attempted a reshuffle he hoped would placate the opposition. Four ministers, including a finance minister, were appointed to temporarily run the government, while several others were handed new posts in an attempt to keep the country functioning "until a full cabinet is appointed," according to a presidential news release.

But just a day later, the temporary finance minister quit -- explaining he had only taken the position due to "multitudes of requests made," and that he realized afterward "fresh and proactive and unconventional steps need to be taken."
And the reshuffle failed to stop further desertions. The ruling Sri Lanka People's Front Coalition (also known as the Sri Lanka Podujana Peramuna) lost 41 seats by Tuesday after members from several partner parties pulled out to continue as independent groups. The coalition was left with only 104 seats, losing its majority in parliament.

What has the government said?

President Rajapaksa issued a statement April 4 but did not directly address the resignations, only urging all parties to "work together for the sake of all the citizens and future generations."

"The current crisis is a result of several economic factors and global developments," the statement read. "As one of the leading democratic countries in Asia, solutions should be found to this within a democratic framework."

Later that day, when announcing the cabinet reshuffle, the President's office released a statement saying Rajapaksa "sought the support of all the people to overcome the economic challenge faced by the country."

On April 6, Chief Government Whip Johnston Fernando said during a parliament session that Rajapaksa will not resign "under any circumstances." Fernando is a member of the ruling coalition and is seen as a close ally to the President.

Previously, Rajapaksa has said he is attempting to resolve the issue, saying in an address to the nation last month that "this crisis was not created by me."

On April 1, Prime Minister Mahinda Rajapaksa -- the President's elder brother and a former President himself -- told CNN it was wrong to say the government had mismanaged the economy. Instead, Covid-19 was one of the causes, he said. 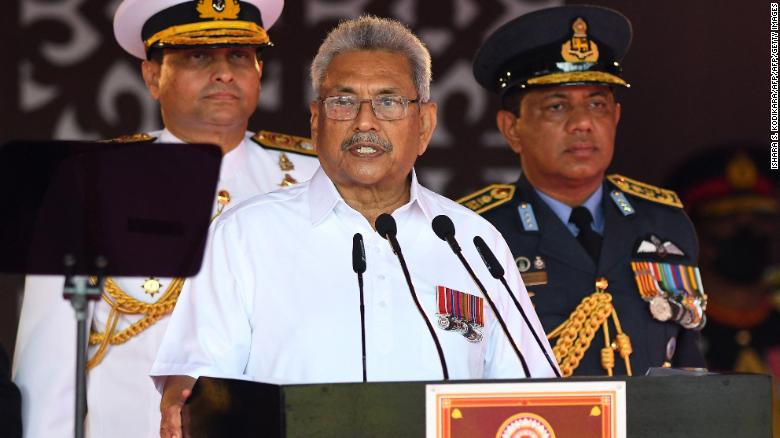 Sri Lanka is now seeking financial support from the IMF and turning to regional powers that may be able to help.

During last month's address, President Rajapaksa said he had weighed the pros and cons of working with the IMF and had decided to pursue a bailout from the Washington-based institution -- something his government had been reluctant to do.

Sri Lanka has also requested help from China and India, with New Delhi already issuing a credit line of $1 billion in March -- but some analysts warned that this assistance might prolong the crisis rather than solve it.

There is still much uncertainty around what comes next; national consumer price inflation has almost tripled, from 6.2% in September to 17.5% in February, according to the country's central bank. And Sri Lanka has to repay about $4 billion in debt over the rest of this year, including a $1 billion international sovereign bond that matures in July.

And the situation has prompted alarm from international observers. Speaking at a news briefing on April 5, Liz Throssell, a spokesperson for the UN High Commissioner for Human Rights, expressed concern over Sri Lanka's official response.

The government's curfew, social media blackout, and police action in breaking up the protests could prevent or discourage people from expressing their grievances, she said, adding that these measures "should not be used to stifle dissent or hinder peaceful protest." She said the UN was watching "closely," and warned against "the drift to militarization and the weakening of institutional checks and balances in Sri Lanka."