An opportunity to face a future Hall of Famer and one of boxing's all-time pound-for-pound best doesn't happen every day, and even less often does such a fight come together 11 days out. But Yordenis Ugas took that opportunity against Manny Pacquiao, and successfully defended his WBA welterweight world title on one of the biggest stages in boxing.

It's the biggest win of Ugas' career, which has come a long way from a two-year hiatus. Naturally, the boxing world and some of its biggest fans were quick to praise Ugas' performance against Pacquiao, and some expressed their pleasant surprise that the judges got the scorecards right in handing Ugas a unanimous decision victory.

Love both fighters… but Ugas won that fight. Congrats

Ugas won!! The judges got it right! @ErrolSpenceJr's probably thinking like, Damn! This could've been my victory against a legend tonight! #PacquiaoUgas @PBConFOX @premierboxing

For those who thought that the Maywearher-Pacquaio fight was boring because Manny had a shoulder jury and couldn't perform...

It wasn't a shoulder injury. It was superior boxing. #PacquiaoUgas

Timing can beat speed, and counters can work with aggressive fighters, Ugas was well prepared and executed. #PacquiaoUgas

Go ahead and hand Ugas that Super title. He fought his ass off.@premierboxing #PacquiaoUgas

Ugas is the real winner tonight! No matter what.

Got Ugas with the win tonight.. #PacquiaoUgas

They will never be ANOTHER Manny Pacquiao

Ugas fought a great fights. Props to manny for taking on a tough challenge still a legend.

LAS VEGAS -- This night was supposed to be a celebration, a culmination of all the great Manny Pacquiao has accomplished -- a champion in eight divisions in four decades, a superstar the world over.

Yordenis Ugas wasn't here for the Pacquiao party, though; Ugas was here for his own arrival. And he made good on his promise to bring all his respect for Pacquiao into the ring.

“"I told you that I'm the only champion of the WBA. He’s a great competitor, but I came in here to show I am the champion of the WBA,” Ugás said. “A lot of respect for him, but I won this fight,” said Ugas via a translator during the post-match interview in the ring.

Ugas, who accepted the assignment on 11 days' notice, scored a unanimous decision over Pacquiao on Saturday at T-Mobile Arena to retain his WBA "super" welterweight title, spoiling the festivities in an upset victory that establishes Ugas as a major player in boxing's best division. 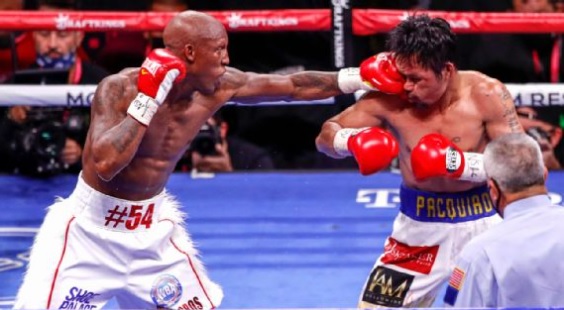 "I'm very excited, but most of all, I want to thank Manny Pacquiao for giving me this moment in this ring today," Ugas (27-4, 12 KOs) said. "Now the plan is to unify the title at welterweight. ... Errol Spence is the next one on the list. ... I am praying that he recuperates."

Pacquiao (62-8-2, 39 KOs) was slated to meet Spence, ESPN's No. 4 pound-for-pound boxer, in a super fight. Those plans were cancelled when it was discovered Spence suffered a detached retina in his left eye just 12 days before the fight.

Ugas, a bronze medalist for Cuba in the 2008 Olympics and ESPN's No. 6 welterweight, was set to defend his title against Fabian Maidana in the co-feature and didn't hesitate to step in to fight Pacquiao when the opportunity of a lifetime shockingly presented itself.

"We only had two weeks of training," Ugas said, "but I listened to my corner, and it all worked out."

Ugas' strategy was simple yet brilliant: a double jab to the head followed by a right hand to the body. A high guard that picked off Pacquiao's incoming shots before a crisp right looped around Pacquiao's gloves and connected upstairs. Counterpunches that hit the target over and over, finally cutting Pacquiao over the left eye in Round 12.

Pacquiao also was cut under his right eye during the fight. His team told ESPN afterward that he needed five stitches to close one of the cuts and also had three stitches glued onto the other. They didn't specify which cut needed which fix.

On this night, under the brightest of lights, Ugas displayed the composure of a heart surgeon, patiently picking his spots with precise punches that constantly met their mark. He also imposed his superior size and strength on Pacquiao, who perhaps was fighting in his final bout.

This 42-year-old, flat-footed version of Pacquiao was not the same fighter who vaulted to the sport with dizzying speed and combinations thrown from seemingly every angle. Now, well past his best and with a potential presidential race to prepare for, this could be it for Pacquiao.

When Pacquiao was asked if this was his final fight, he said, "I don't know. I need to relax and make a decision."

"That's boxing," he said. "I had a hard time in the ring making adjustments. ... My legs were tight. I'm sorry I lost tonight, but I did my best."

A senator in the Philippines, Pacquiao said he'll make an announcement in September regarding his decision ahead of May's presidential election against incumbent Rodrigo Duterte.

Whether he wins or loses or ever fights again, Pacquiao still owns the adulation of not just his countrymen but the sporting world. Beloved for his megawatt smile during his ring walks and the brutality he delivered inside the ropes, Pacquiao remains a superstar in a sport short on them.

He entered the ring once again, smiling to the tune of "Eye of the Tiger," and started strong, leading the crowd of 17,438 to chant "Man-ny, Man-ny" as flurries pushed Ugas to the ropes in the opening round. Pacquiao wouldn't find another moment like it in this fight. He might never find that moment again.

Fighters rarely leave on top in this cruelest of sports, and it would only be fitting if Pacquiao retired after such a comprehensive loss. After all, it was Pacquiao who sent Oscar De La Hoya into retirement in 2008, an eight-round beating from pillar to post that left "The Golden Boy" bleeding on his stool when the towel was waved.

This wasn't that. Instead, it was a far slower version of Pacquiao, one who still has the fighting heart but not the speed and power that were the hallmarks of his legendary career.

Pacquiao typically attacks from angles, sliding to his left and right to find the opening. On this night, he attacked in straight lines, flat-footed. Ugas seemingly saw every shot. His high guard picked off many of Pacquiao's incoming combinations, which now lacked the elite speed and movement to always connect.

Ugas outlanded Pacquiao 151-130 despite Pacquiao throwing more than twice as many punches, 815-405. The underdog never threw more than 45 punches in a round, but he didn't have to. Ugas was far more effective, content to sit in the pocket and deliver his own stinging counterpunches that were far more damaging.

Ugas, 35, has now won four straight since dropping a disputed split decision to Shawn Porter in March 2019, a fight many thought Ugas won. That was Ugas' first crack at a title -- and his first fight against a truly elite boxer.

Even in defeat, Ugas proved his mettle and skill in establishing himself as one of the world's 10 best welterweights.

Four months after Ugas' loss to Porter, in July 2019, Pacquiao regained the welterweight title with a decision victory over Keith Thurman. It was an impressive performance that proved Pacquiao was still one of the best fighters in the world, if not the same man who blasted his way to the top of the pound-for-pound list.

Before he could defend the belt in the ring, Pacquiao was stripped due to inactivity. The man who was elevated to champion in his absence? Ugas.

A lot can change in 25 months. Pacquiao will turn 43 in December. If he wishes to fight on, people will still care and watch. But it won't be the same. There might never be another Manny Pacquiao.

But Pacquiao as we knew him in the ring is likely no more.