Supervisory Committee Holds Forum for Candidates of the Shura Council

The Supervisory Committee for the Shura Council Elections held Wednesday a forum for candidates of the Shura Council aimed at promoting the awareness of the electoral process in its legal and organizational aspects.

The forum, attended by candidates registered in the preliminary lists, shed light on the legal and organizational procedures related to electoral campaigning and its requirements as regulated by law; and provided an explanation of some procedures related to the polling day and the requirements of the committee monitoring spending on electoral campaigning.

Members of the Supervisory Committee listened to all the questions and inquiries raised by the candidates and provided adequate answers to all questions.

Vice-Chairman of the Supervisory Committee for the Shura Council Elections Brigadier-General Salem Saqr Al Muraikhi stressed the significance of this important national entitlement, indicating the Committee's keenness on providing all facilities to candidates and voters for the elections to be achieved in the fullest manner.

Brigadier-General Al Muraikhi noted the direction of HE Prime Minister and Minister of Interior Sheikh Khalid bin Khalifa bin Abdulaziz Al-Thani to the Committee to carry out its role in responding to candidates, listening to them and clarifying all procedures related to the electoral process. 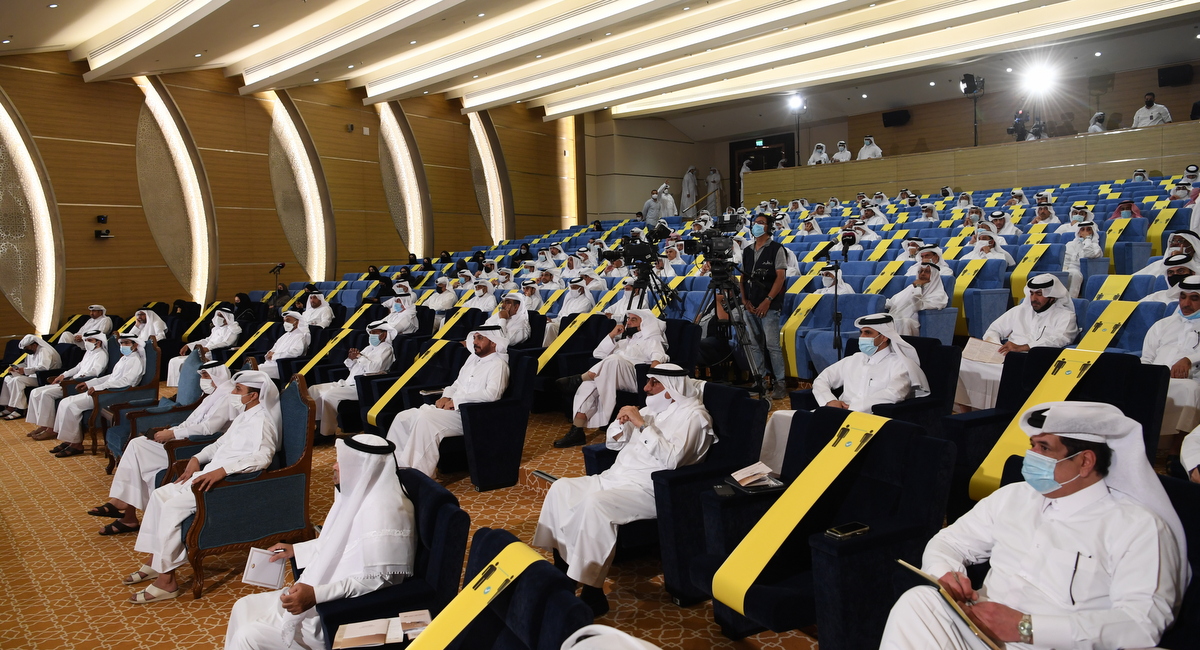 On the election procedures, Al Muraikhi explained that according to the law, each electoral district has a committee called the "election committee" formed under the chairmanship of a judge chosen by the Supreme Judiciary Council, and two members, one from the Ministry of Interior and the other from the Ministry of Justice.

The committee is responsible for conducting the polling process, counting the votes and announcing the result at the electoral district headquarters.

On the other hand, Head of the Media Section of the Supervisory Committee Brigadier Abdullah Khalifa Al Muftah reviewed the controls of the election campaigns in accordance with the legal texts. He explained that the law specified the period for practicing electoral campaigns to start after the announcement of the final lists of candidates and to end twenty-four hours before the start of the election process.

He cautioned that it is not permissible to conduct election campaigns in a period other than the aforementioned period, and that the maximum expenditure for each candidate in the election campaign is two million Qatari riyals, adding that the municipalities will determine the places for placing advertisements, posters or electoral statements, and will allocate equal spaces in these places for candidates.

According to the law, the candidate is obliged when practicing electoral campaigning to respect the provisions of the constitution, respect the freedom of others to express their opinion, maintain national unity and the security of society, and not conduct any electoral campaign that involves deceiving voters or using the method of defamation or defamation of others, Brig. Al Muftah stressed.

He also cautioned against using the official state emblem or its symbols in meetings, advertisements, electoral bulletins, and all kinds of writings and drawings used in electoral campaigns.

Other controls mentioned by Brig. Al Muftah include that means of electoral campaigning must not be similar to traffic signs and banners or other official signs in terms of the size, shape and colors; not violate the heights, measurements or dimensions determined by the competent municipalities; not obstructs the movement of traffic or pedestrians, or leads to blocking or disabling the functions of traffic lights or obstructing rescue means.

In addition, a written approval must be obtained from the property owner or his representative if the advertising means will be installed on real estate not owned by the candidate; and its must not pose a danger to the users of the property or disturb their comfort.

Other the controls set by the law stipulates that the installation of the electoral advertising means should not cause any damage to public utilities, or endanger the lives of individuals or property, or conflict with the aesthetic character of the area or disturb the public view, Brig. Abdullah Khalifa Al Muftah added.

He added that the candidate is prohibited from organizing and holding electoral meetings, giving speeches or placing posters, advertisements or pictures in places of worship, religious centers, educational facilities, government facilities, and facilities and buildings of an archaeological or historical nature and the surrounding fences.

According to the law, loudspeakers are not allowed for electoral campaigning purposes without a license from the competent municipality, provided that the places and times specified in the license are observed.

Brig. Al Muftah added that Article (27) stipulates that it is not permissible for any of the employees in ministries and other government agencies and public bodies and institutions to carry out any election campaigning during the course of their work or their official working hours.

Meanwhile, Brig. Al Muftah noted that the candidate must remove electoral advertisements, posters, flyers, and any means of electoral propaganda within three days from the date of the end of the electoral process.

He added that the law obligated all public and private media outlets to observe equality, objectivity and impartiality in handling and media coverage of the elections, in accordance with recognized professional principles.

In order to facilitate for the candidates, a group of halls in sports clubs and youth centers in various areas of the country has been identified to hold meetings and seminars for free. They were provided with all technical requirements, taking into account the current health conditions due to the coronavirus pandemic and to ensure the application of precautionary measures.

Brig. Abdullah Khalifa Al Muftah noted that Media Committee is fully prepared to provide assistance to the candidates, noting the free media services provided by the Qatar Media Corporation to all candidates to review their electoral programs and communicate with voters through the various media outlets. (QNA)