Rockets struck a neighbourhood near Kabul’s international airport on Monday amid the ongoing US withdrawal from Afghanistan. It wasn’t immediately clear who launched them.

A witness who spoke on condition of anonymity for fear of reprisals said they heard the sound of three explosions and then saw a flash, like fire, in the sky.

People fled after the blasts, the witness said.

US officials did not immediately respond to requests for comment. US military cargo planes continued their evacuations at the airport after the rocket fire.

On Sunday, a US drone strike blew up a vehicle carrying “multiple suicide bombers” from Afghanistan’s Islamic State affiliate on Sunday before they could attack the ongoing military evacuation at Kabul’s international airport, American officials said.

An Afghan official said three children were killed in the strike.

The US is to withdraw from Afghanistan by Tuesday. 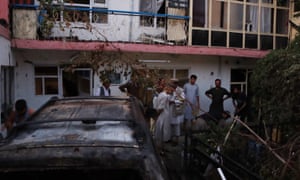 Damage at the scene of an US drone attack near the Hamid Karzai International airport, in Kabul Photograph: EPA

More on those rocket attacks on Kabul early Monday morning. From agencies in the Afghan capital:

Several rockets were fired at Kabul’s airport on Monday, witnesses and security sources said, less than 48 hours before the United States is due to complete its troop withdrawal from Afghanistan.

The sound of rockets whooshing over the capital was heard by AFP staff before the morning rush hour began.

A security official who worked in the administration toppled two weeks ago by the Taliban said the rockets had been fired from a vehicle in north Kabul.

The sound of the airport’s missile defence system could be heard by local residents, who also reported shrapnel falling into the street - suggesting at least one rocket had been intercepted.

Smoke could be seen rising above buildings in the north, where the Hamid Karzai International Airport is located. 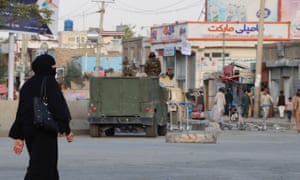 Social media posts - which could not immediately be verified - also showed a vehicle on fire after being apparently struck by retaliatory fire.

A US official told Reuters as many as five rockets had been fired at Kabul airport but were intercepted by US anti-missile system. Initial reports said there were no US casualties. More details are being sought.

An evacuation of foreigners and Afghans considered at risk of Taliban retribution for working with US-led forces for the last 20 years is in its finals stages and will officially end Tuesday when the last American troops pull out.

The Islamic State group, rivals of the Taliban, pose the biggest threat to the withdrawal after carrying out a suicide bomb attack at the airport last week that claimed more than 100 lives, including 13 US troops.

US president Joe Biden had warned more attacks were highly likely, and the United States said it carried out an air strike Sunday night in Kabul on an explosives-laden vehicle.