Scientists are trying to control lightning with a giant laser

An experimental laser will soon be tested at Säntis, in the Swiss Alps, where the radio transmission tower at its summit is hit by lightning hundreds of times each year.

A team of researchers from the University of Geneva has hauled a huge laser atop a mountain to shoot it at the sky, and act as a high-tech lightning rod.

The team is led by Jean-Pierre Wolf, a Swiss physicist who's been working with laser for more than 20 years and has been particularly fascinated with attempting to control the weather with it.

Laser creates very narrow, high-energy beams of light. Its applications range from cutting diamonds to surgery to reading barcodes, and Wolf believes he can add another to the list: protecting us from lightning.

He's leading an EU-funded consortium which includes universities in Paris and Lausanne, as well as rocket manufacturer ArianeGroup and the maker of the laser, German high-tech company Trumpf. After a year of delays due to the pandemic, the laser has been transported to the summit of Säntis, a mountain in the Swiss alps with an elevation of 2,500 meters (8,200 feet).

"This is one of the places in Europe that's struck by lightning the most," explained Wolf. "There is a radio transmission tower there which gets struck 100 to 400 times a year. So it's an ideal place to make our proof-of-concept experiments."

Artificial lightning
Lightning forms when turbulent air within a thundercloud violently tosses around ice crystals and water droplets, stripping electrons from their atoms and creating separate zones with opposite electric charges.

These electric fields can become very strong, and because opposite charges attract, they can connect through a discharge of electricity -- what we call lightning.

The laser mimics and enhances this natural scenario by generating an electric field so strong that it rips electrons off their atoms directly, setting up the opposite charges that are necessary for lightning to form.

The idea is to make the clouds discharge lightning in a controlled way. "That's why we call it a laser lightning rod," said Wolf.

The beam will run alongside the existing transmission tower -- which is over 120 meters (about 400 feet) tall. 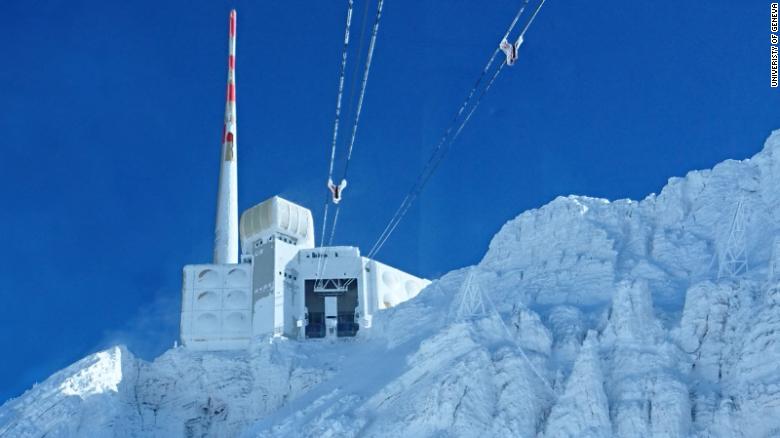 The laser has been taken to a radio transmission tower at the summit of Säntis, in the Swiss alps.

The theory is that the laser can act both as a lightning rod, catching bolts that would strike anyway, and also trigger extra ones.

"That would mean we would be unloading the thundercloud, reducing its voltage and then preventing further lightning strikes in the surrounding area," said Wolf.

Wolf says that the most immediate practical applications of the technology would be to protect rockets -- such as those carrying satellites into orbit -- during launches, and at airports, where it could be turned on during storms.

He added that the demand for lightning protection is vast, and that the costs associated with lightning strikes, especially from air traffic disruption, could be in the billions of dollars each year in the US alone. Research also shows that increased lightning strikes could be among the effects of climate change.

The European Commission is backing the project through an initiative that supports early-stage scientific research. It says that globally, lightning kills between 6,000 and 24,000 people each year, as well as causing billions of euros of damage to electronics and infrastructure, making it "a major societal concern."

It adds that the project is expected to lead to safer air transport and reduced flight delays during intense thunderstorms.

The laser will draw power from the antenna facility, and was brought to the mountaintop disassembled, in a complex operation that involved multiple trips via cable car and helicopter.
"It's a huge laser -- it takes a large truck to transport it, which is why it was built like a puzzle, with modules that can be put together on site," said Wolf. 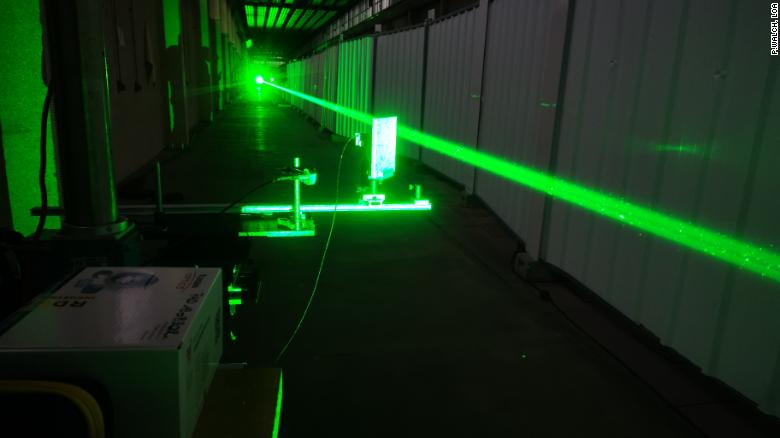 The one-year pandemic delay let the team run more tests of the laser in a lab in Paris, pictured here.

A total of 29 tons of material were hauled, including 18 tons of concrete blocks to anchor the laser array to its base. "We get 120 mph winds here, so that was needed to stabilize the structure, or it could easily be shifted or even fly off," said Wolf.

Assembly took two weeks, and the laser is now ready to be switched on, bad weather permitting -- which in this case means hoping for it.

The laser shoots 1,000 times per second and it's so powerful that "a single pulse at peak power is equal to that produced by all the nuclear power plants in the world," according to Wolf -- but only for an extremely short time.

For safety reasons, a five-kilometer wide no-fly zone will be in place when the laser is active. Although it poses no risk to aircraft, laser is harmful to human eyes when looking directly at the source (looking at the beam from the mountain or from the air while not directly on top of it is fine, says Wolf).

The laser won't be switched on all the time, but rather only when increased lightning activity is detected. On the mountain, special camera equipment will photograph lightning bolts 300,000 times per second, to see how closely they will follow the laser beam and at which altitude.

"One interesting thing is that, due to the high peak power, our laser will change color," said Wolf. "It will go from red to white as it propagates in the air. It will be really cool to see."

Tests will last until September, the end of lightning season. If they are successful, the next experiment could be at an airport, Wolf said, and the technology could be ready in a few years.

"We'll know fairly soon if we're successful or not, although analyzing the data in detail will take more time," he added. "But I think that at the end of September we will either open a bottle of champagne or a bottle of whiskey, if you see what I mean."