Qatar and Slovenia, A Promising Future and Identical Visions

Qatar and Slovenia, A Promising Future and Identical Visions

HH the Amir Sheikh Tamim bin Hamad Al-Thani arrived in the capital Ljubljana on Sunday on an official visit to the friendly Republic of Slovenia, the first leg of a European tour. 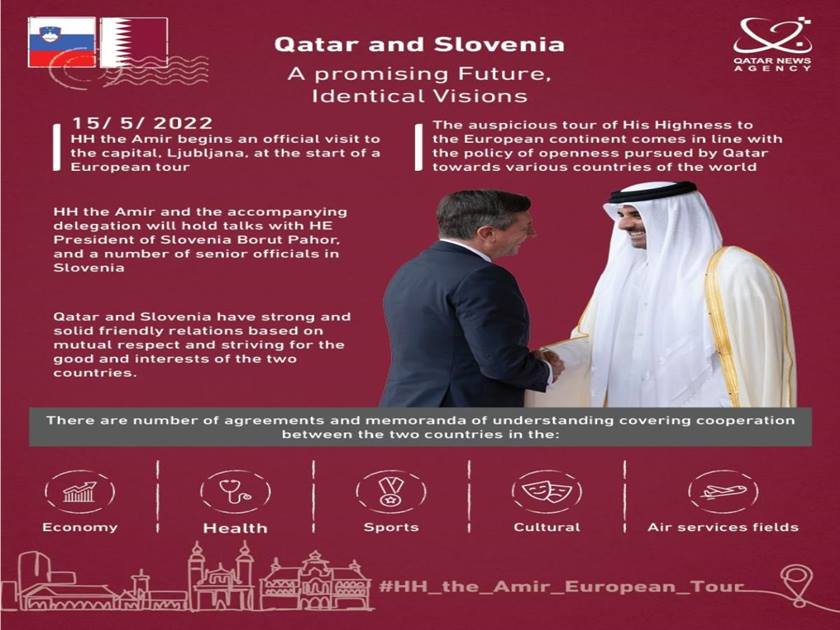 During the visit to Slovenia, HH the Amir and the accompanying delegation will hold talks with HE President of the Republic of Slovenia Borut Pahor, and a number of senior officials in the country, on the good relations between the two countries and ways to support and develop them in various fields, in addition to a review of the latest developments in the global arena and international issues of common interest.

HH the Amir's European tour comes in line with the openness policy pursued by the State of Qatar towards various countries of the world, and in the context of its consistent strategy aimed at strengthening and developing its political relations with all countries, strengthening its trade and economic ties, diversifying its sources of income and activating its investments in various continents, in a tangible indication of the vitality of the Qatari diplomacy and the active role played by the State of Qatar on the international map in many fields, especially in politics, economy, energy, and the mediation diplomacy and peaceful solutions based on dialogue and negotiation.

The State of Qatar and the Republic of Slovenia enjoy strong and solid friendly relations based on mutual respect and the keenness on the good and interests of the two countries and their friendly peoples, as well as peace, stability, and prosperity in the world.

The Qatari-Slovenian relations have witnessed tangible progress with the support of the wise vision and the lofty directives of HH the Amir and HE the President of the Republic of Slovenia. The future bodes well for the strengthening, consolidation and expansion of these relations through mutual visits between the two countries which take place at the highest levels, and through economic and trade delegations.

The two countries are linked by are number of agreements and memoranda of understanding covering the bilateral cooperation in various areas including economy, health, sports, culture, air services, avoidance of double taxation, prevention of financial evasion, joint news exchange between Qatar News Agency and the News Agency of the Republic of Slovenia, in addition to a protocol for consultation between the foreign ministries of the two countries and a memorandum of understanding for cooperation in the tourism field.

In January 2015, HE Borut Pahor, President of the Republic of Slovenia, visited Doha to attend the opening of the 24th Men's Handball World Championship.

HH the Amir Sheikh Tamim bin Hamad Al-Thani received HE President Borut Pahor in New York on the sidelines of the 76th session of the United Nations General Assembly in September 2021.
HE President Borut Pahor paid an official visit to Qatar in March, and held a session of official talks at the Amiri Diwan discussed the bilateral relations and ways to support and develop them in all fields, especially in investment and economy, in addition to several regional and international issues of concern to the two countries, including the developments in the region.

HE President Borut Pahor described the talks he held with HH the Amir as very positive and wonderful, and pave the way for further strengthening of bilateral relations. He said that the State of Qatar enjoys an important position at the regional and international levels, and is witnessing a remarkable renaissance in all fields, thanks to the efforts of HH the Amir and the government, adding that it is important to strengthen the relations with Qatar and develop cooperation to broader horizons.

HE President Borut Pahor also affirmed that the views of his country and the State of Qatar are identical on international issues, such as peaceful solutions to conflicts and disputes and adherence to constructive tolerance. He pointed out that the prospects for cooperation between the two countries in the political and economic fields are very promising, saying that the State of Qatar is currently the focus of the world's attention with the approach of the FIFA World Cup Qatar 2022. He expressed his confidence that the State of Qatar will organize a wonderful version of the World Cup.
Regarding the political relations, political consultations were held last August in the Slovenian capital, Ljubljana, between the two countries foreign ministries, during which they reviewed bilateral cooperation relations between the two friendly countries and ways to develop them in the future.

His Excellency expressed Qatar's aspiration to develop economic, trade and investment relations between the two countries, and pointed out that the Qatari-Slovenian talks discussed the peace process in the Middle East. He affirmed Qatar's clear position based on the two-state solution, ending the occupation, and the establishment of the State of Palestine on the 1967 borders, with Jerusalem as its capital.

HE the Slovenian Minister of Foreign Affairs presented his country's presidential plan to the Deputy Prime Minister and Minister of Foreign Affairs which would make progress on the issue of common interest and develop bilateral cooperation. It was agreed to hold the second meeting of the joint committee between the two countries to promote trade and investments in the fields of energy, tourism, communications, information technology and the environment.

The first meeting of the committee was held in Ljubljana in May 2016, and was preceded in November 2013 by the Slovenian-Qatari Business Forum which was organized by in Doha by Qatar Chamber in cooperation with the Agency for Promotion, Development, Investment and Tourism in Slovenia. In these meetings, the investment climate in Qatar and the Republic of Slovenia was reviewed.

The State of Qatar has become the gateway to investment in the Middle East, as the Qatari market has great investment opportunities because of the comprehensive renaissance witnessed by the country and the projects related to Qatar National Vision 2030, as well as the facilities, laws and legislation enacted by the state to facilitate the investment and business environment aimed at supporting and strengthening the Qatari economy.

Slovenia occupies a strategic location at the crossroads of Central Europe and is a member of the European Union and the Eurozone, with an area of 20,273 km and a population of just over two million people. Slovenia is a developed and stable country that adopts an open market economy, based mainly on services and trade, the value of its exports in 2020, amounted to about $44.8 billion and the most important exports are medicines, cars, machinery, electrical equipment, computers, plastics, iron, steel, aluminum, glass, ceramics and prefabricated buildings.