The new airport is one of four major projects Andres Manuel Lopez Obrador is racing to finish before his term ends in 2024.

Mexico’s President Andres Manuel Lopez Obrador inaugurated a new airport serving Mexico City, in a hallmark move more than three years after he scrapped a separate partly built multibillion-dollar construction project by the previous government that he said was a symbol of corruption.

A handful of flights took off from the Felipe Angeles International Airport north of the capital on Monday as Lopez Obrador was on hand for its official opening. It begins operations without a train connection, which is due to be ready next year.

The airport, built on the site of a former military air base, is the first of the major infrastructure projects planned by Lopez Obrador to be launched, and is aimed at easing congestion at the current Mexico City hub that lies approximately 45kms (28 miles) to the south.

Earlier on Monday he held his regular morning news conference at the airport and quickly rounded on critics who had questioned whether it would be completed.

“This work was done in spite of resistance from vested interests and people who wished us ill,” said Lopez Obrador.

The new airport is one of four keystone projects Lopez Obrador is racing to finish before his term ends in 2024. The president is also planning to unveil an oil refinery, a tourist train in the Yucatan Peninsula and a train linking Gulf coast and Pacific seaports. By law, Mexican presidents can serve one six-year term.

Lopez Obrador has branded himself as leading a historic, irreversible “transformation” of Mexico, and he has turned to building projects — and the army — to guard that legacy. The army will actually own and operate some of the projects after they are finished.

“Because of Lopez Obrador’s revolutionary rush to deliver everything he offered in six years, which is obviously impossible, he has done everything in an improvised way,” said political analyst Jose Antonio Crespo. “He has said several times, this is not just another administration; this is a revolution.”

The airport was built despite criticism from business groups that had backed the partly built hub cancelled by Lopez Obrador just a few weeks before he took office.

Following a contentious October 2018 referendum he promoted, Lopez Obrador ditched the unfinished airport in Texcoco on Mexico City’s eastern flank, arguing the project was riddled with corruption, geologically unsound, and too expensive.

The decision rattled markets and set the tone for an often fractious relationship with business under his administration.

The government spent $1.8bn paying off the Texcoco bondholders, adding to costs sunk into the cancelled airport, which the president labelled “pharaonic.” He then put the Mexican army in charge of building the new airport.

So far only one international flight is scheduled from the airport – to Caracas, Venezuela. The new airport, about 48 kms (30 miles) outside Mexico City, not only has no rail link, but expressways have not been completed either.

Mexico is mulling possible incentives to encourage airlines to move operations there from the current Mexico City hub, a senior official said this month.

Some critics of the Felipe Angeles hub have questioned whether both airports will be able to operate properly simultaneously. The government is adamant that they will. 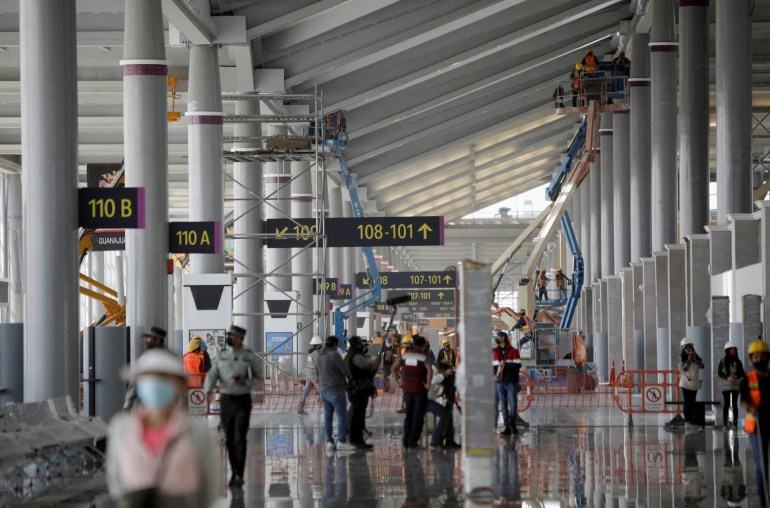 The new airport has been built for less than half the cost of his predecessor’s project, whose foundations are now sinking into what was once a lakebed.

Lopez Obrador’s administration has claimed it will take only 1.5 hours for residents to reach the new terminal from the south side of the megalopolis that is Mexico City, home to 20 million people.

That may be true when highways are clear, but the normally snarled streets could turn that into an unpredictable journey of 2.5 hours – longer than some of the domestic flights themselves.

Nasheli Martinez, a 40-year-old accountant from Mexico City, said she was nervous but excited as she prepared to travel to the beach resort of Cancun with her mother.

“We set off at 7 am and it took two hours” to get to the airport, she said. “Because we got the maps going, and it sent us out onto dirt roads.”