Motorcycle drivers wait to get fuel at a gas station in Beirut, Lebanon. AP Photo

Lebanon’s fuel crisis worsened on Saturday as petrol stations across the country remained closed and drivers slept in the long queues at the few that opened in the hope of buying some of the scarce fuel available.

The shortages persisted a day after a recently formed government announced a 38 per cent price hike on fuel amid confusion on the lifting of subsidies.

“It’s the worst situation now. They increased the price and there is no fuel,” said taxi company owner Toufic Moussa, who drove more than 40 kilometres south of Beirut to the coastal city of Saida to buy fuel on the black market, costing him over four times more than the new official price.

Shortages have caused long queues in front of petrol stations in recent months but drivers said the situation appeared worse on Saturday with even less fuel available.

“We are used to standing in line for a long time but at the end, they filled our tank. Now they give us 20 or 25 litres,” said Mohamed Kreidieh, another taxi driver.

Mr Kreidieh waited in line at a petrol station from 3am to 3pm on Sunday to fill up less than a third of his car's tank. This will only last him a day.

“The situation is very bad. It’s worse than a week ago,” he said.

Over half of the petrol stations in Beirut and towns surrounding it were closed on Saturdays, according to taxi drivers The National spoke to.

This can be explained in part by the General Directorate of Oil’s decision to close fuel delivery companies on Thursday, said George Brax, a spokesman for the station owners’ union, who did not give further details on the move. Lebanese daily L’Orient Le Jour reported the directorate wanted to do an inventory of the country’s fuel stocks. 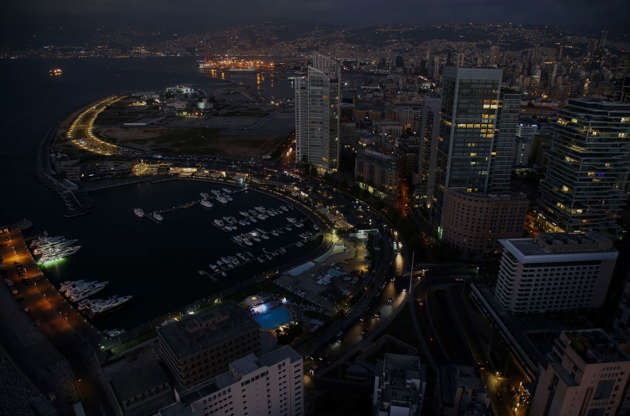 A view of Lebanon's capital, Beirut, with the lights on only in some buildings. Lebanese rely on highly polluting diesel generators run by private neighbourhood operators to make up for shortfalls in electricity supply from the state utility. EPA

The Energy Ministry’s decision to hike prices came at noon on Friday, meaning delivery companies, which are closed on the weekend, only had time to operate in the afternoon, Mr Brax told The National.

Lebanon’s top officials, including its central bank governor and president, struck a deal on August 21 to change the dollar exchange rate for fuel imports from 3,900 to 8,000 Lebanese pounds to the dollar, increasing prices at the time by 66 per cent overnight.

The decision, which cost the government $225 million, was expected to remain in place until late September as the cash-strapped central bank attempts to gradually lift subsidies on food, medicine and fuel, that had been put in place at the start of the country’s worst-ever economic crisis in 2019.

The value of Lebanon’s local currency has plummeted in the past two years.

Despite no public announcement by officials, Friday’s move signals a decision by the central bank to shift the exchange rate for fuel imports from 8,000 to 12,000 Lebanese pounds to the dollar, said Mr Brax.

“I believe that subsidies will be totally lifted by the end of the month,” he said. A central bank spokesperson was not available for comment.

Lebanon's state-run National News Agency reported that a tanker laden with 16,000 tonnes of fuel from Iraq had started discharging on Sunday at the state-run power plant of Zahrani after a first batch was unloaded on Sunday in another power plant in north Lebanon.

In parallel, and in a move that was solely organised by Hezbollah, a local political party that also operates a powerful militia, Iranian fuel started arriving by truck from Syria on Friday, despite US sanctions targeting the fuel transfers.

But importers previously told The National that quantities only represent a fraction of the country’s needs.

Lebanon’s Prime Minister Najib Mikati told CNN on Friday that while Hezbollah’s move “makes him sad” because it violates Lebanon’s sovereignty, he is not concerned by US sanctions “because the operation was carried out without the involvement of the Lebanese government.”