Israeli police say four of the six men who escaped from a prison in Northern Israel on Monday have now been recaptured.

The first two were arrested on Friday evening in Nazareth, about 30 kilometers (18 miles) from the Gilboa prison where the breakout happened, while two other escapees were picked up in the early hours of Saturday in the village of Umm Al-Ghanam, about 25 kilometers (15 miles) from the prison.
Photos and video circulating on social media Friday evening show the first two men -- Mahmoud Al-Ardda and Yacoub Al-Qadri -- sitting separately in police vehicles as officers secure them following their arrest.
A police statement on Saturday said Zakaria Zubeidi and Mohammed Al-Ardda were found in a truck parking lot after an operation involving soldiers, police and intelligence officers.

Video released by police showed the two men -- blindfolded and handcuffed - being walked to police vehicles following their arrest.

News of the recapture will ease the pressure slightly on Israeli authorities left reeling after it emerged the six men were able to take advantage of underground passageways built to carry the prison's drainage system to aid their escape
Israeli media has also reported that prison watchtowers were left unmanned, or guards were asleep, as the breakout happened. Authorities have not confirmed these reports. 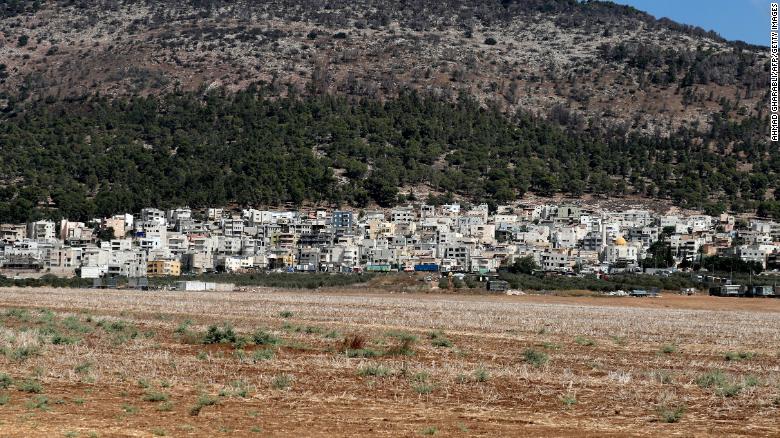 The village of Umm Al-Ghanam where two of the six escapees were recaptured by Israeli police on September 11, 2021. 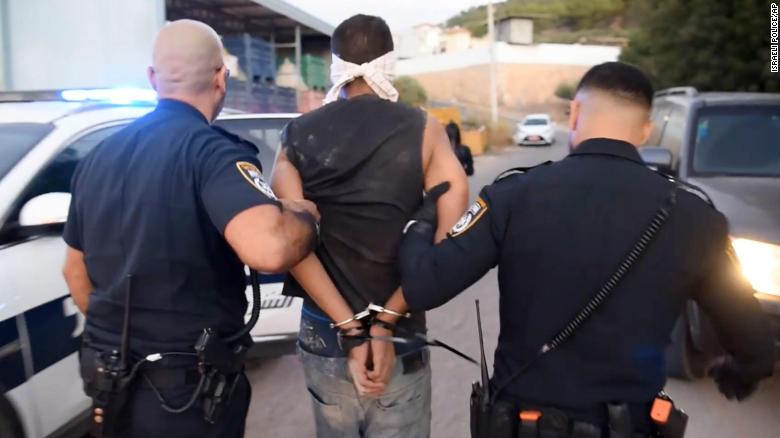 It also emerged in the Israeli media that the prison blueprints, showing the passageways, had been uploaded onto the Internet by the building architects, though it is not known if the prisoners took advantage of the information in their escape.
Five of the men are members of the militant Islamic Jihad group. Mohammed Al-Ardda and Mahmoud Al-Ardda are brothers. Zubeidi is a former commander of the armed wing of the largest Palestinian faction, Fatah.

The escape has prompted enhanced security measures at Israeli prisons, including the movement of prisoners to other facilities, according to a spokesperson for the Israel Prison Service, who said Palestinian prisoners have rioted and set fire to their cells in protest.

In a development almost certainly intended as a response to the men's recapture, a rocket was fired from Gaza into Israel late Friday evening. The launch was intercepted by Israel's Iron Dome aerial defense system, the military said, and there were no reports of any damage.

In a retaliatory strike, the Israeli military said it had attacked a Hamas machine gun post, storage site, and military compound in Gaza.

The escape of the six prisoners has captured the full attention of Israelis and Palestinians all week. For many Palestinians, the prison break has become a symbol of resistance. Mustafa Barghouti, a long-time independent voice in Palestinian politics, said news that some of the men had been recaptured "does not diminish their heroic achievement."

"Six militants fought, and are still fighting, with their bare hands for days in a valiant battle against the Israeli army and all its security services and technical and financial capabilities," he said.

Israel's Public Security Minister Omer Barlev thanked security forces for their efforts in recapturing four of the six men and vowed the two remaining escapees would also be caught.

And he also confirmed reports in Israeli media that Arab citizens of Israel had helped police in their manhunt, tweeting, "I would like to thank the Israeli Arab citizens who assisted in catching the prisoners. For four days, the fugitives roamed, believing that they would find shelter and help among Israeli Arabs - but they were wrong. Wherever they went and were identified, Arab citizens rejected their plea and dialed the police. Well done to all responsible citizens!"