Qatar is home to less than 3 million people and more than a million fans are expected to travel to the country for the 2022 FIFA World Cup, so the legacy of the event has to be managed carefully.

To that end, the tournament organizers and the government officials are stepping up efforts to fine-tune the preparations ahead of the event.

Today, the Stadium Security Section under the Establishments' and Authorities' Security Department of the Ministry of Interior (MoI) organized a webinar as part of its awareness initiative "You are Important.”

The objective of this webinar is to raise awareness among the public on the safety and security procedures that should be taken while participating in the sports matches and events at the stadiums and the role of the general public in achieving them.

Among the webinar highlights are the “Do’s and Don'ts to Remember When Inside the Qatar Stadiums.” Here are some important points:

• Do NOT enter the following prohibited areas:

• Do NOT stand at the entrances to the galleries.

• Do NOT stand in the aisles/ corridors.

• Do NOT stand on the stairs. 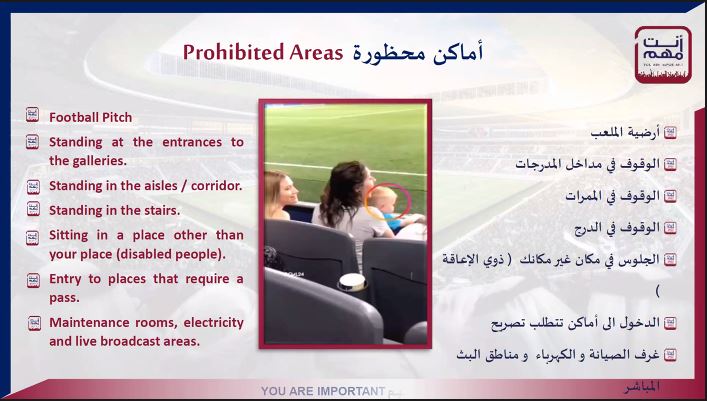 • Do NOT bring the following prohibited items in the stadiums:

• All kinds of fireworks

• All kinds of "alcoholic" drinks 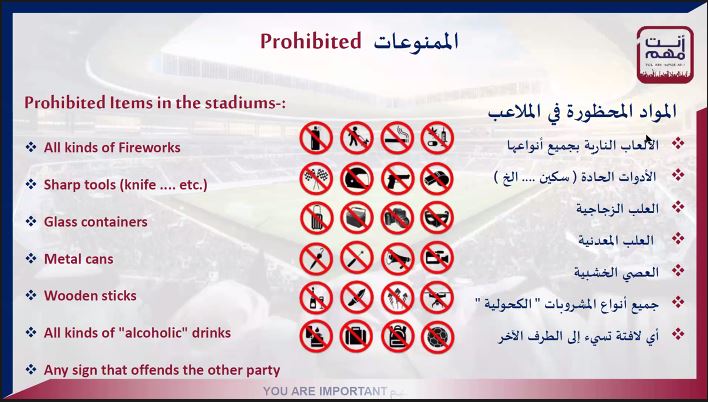 • Do stay away from fanaticism and accept loss

• Do notify the security in emergency situations.

• Do assist the security in directing the public to the nearest emergency exit and assembly point.

• Do get away from the danger zone. 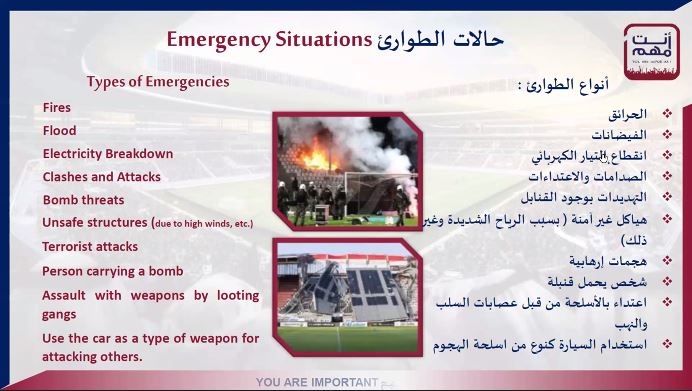 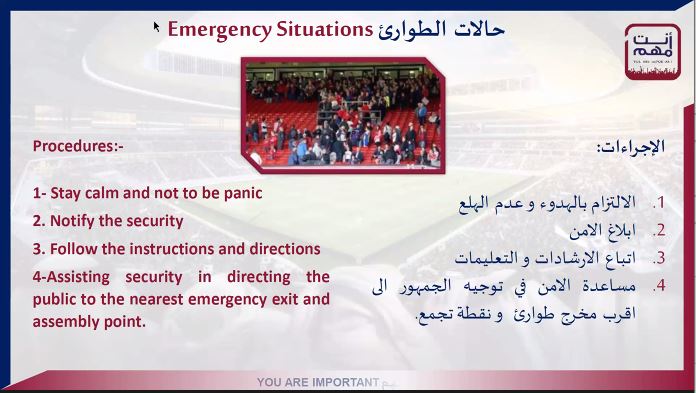 • Do assess the victim by verifying if the victim is conscious by asking:

- Is the victim breathing?

- Did the victim take any medication?

- Does the victim have any visible injuries?

• Do call for first aid assistance. 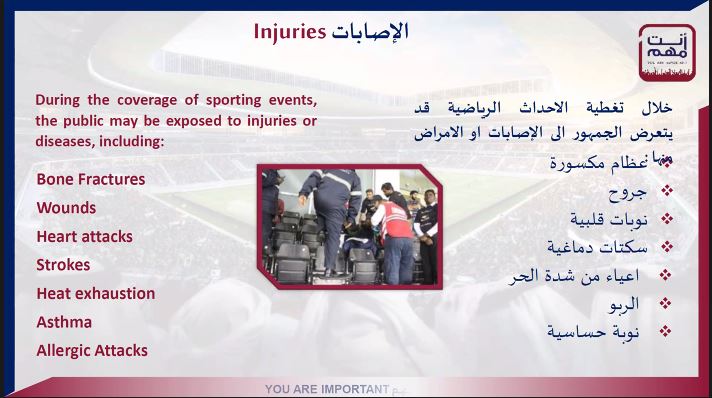 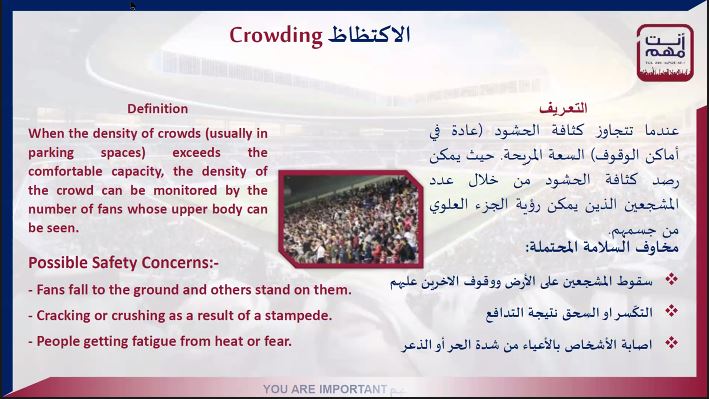 • Do remember the location of the nearest fire extinguishers.

• Do stay alert to the dangers of fires caused by smoking and material accumulation in waste containers. 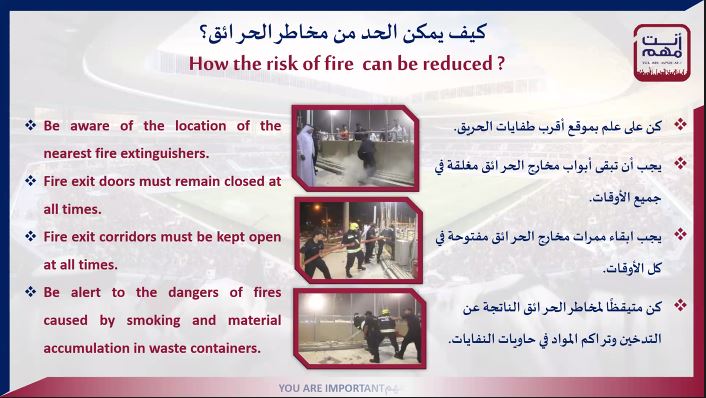 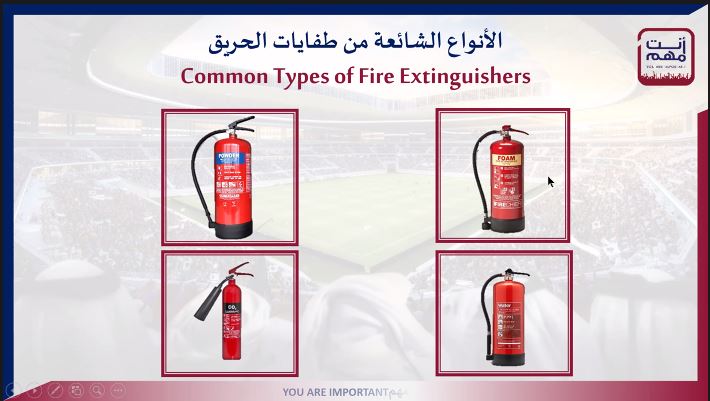 • Do remember these evacuation points in any of the stadiums. 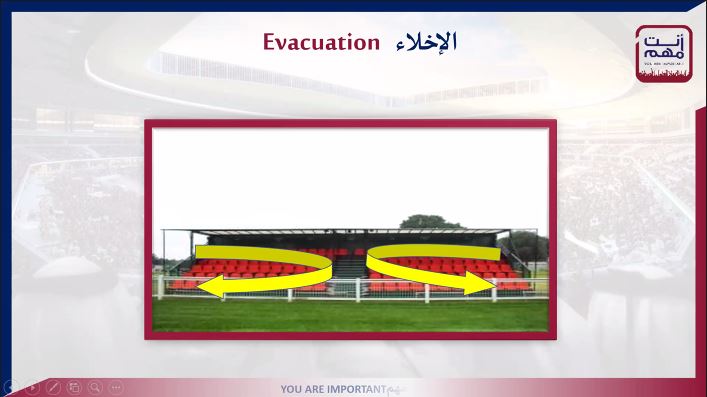 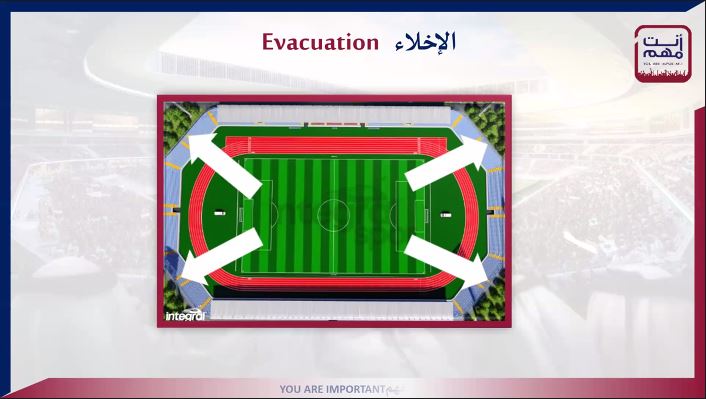 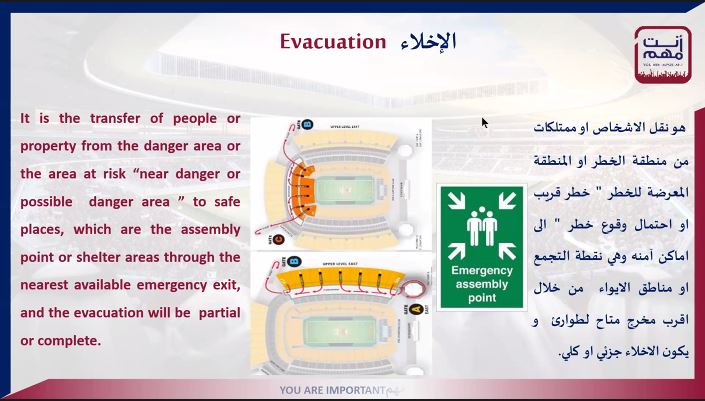 About the ‘You are Important’ Initiative

Among the most important objectives of the "You are Important” initiative are:

• Educating the public on the proper behavior in emergency situations

• Informing the public about the duties of the stadium security personnel and the role assigned to them during the security coverage of sporting events. 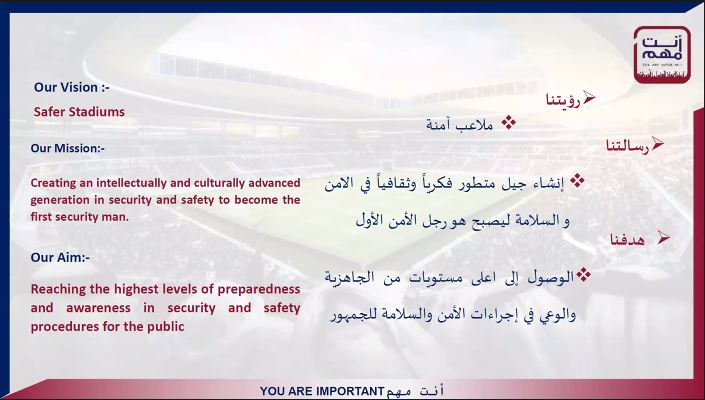 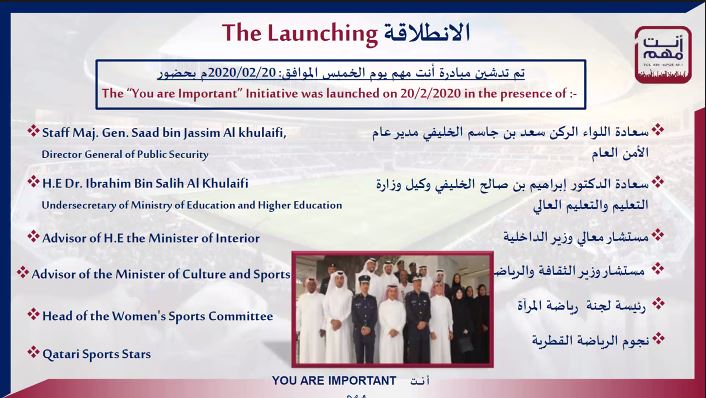 The first World Cup in the Middle East and Arab world will kick off on 21 November and conclude on 18 December – Qatar National Day.

These giant sporting events will not only be the first tournaments to be held in the Arab region, but both will be the most compact version of the World Cup in modern history, allowing fans to attend more than one game a day.

Many of the stadiums have been inaugurated, the metro is up and running, and a host of expressways have been built.

With high summer temperatures, each stadium, training facility and fan zone is equipped with solar-powered cooling technology to keep the temperature at 27C. All stadiums are eco-friendly and their temperature will be controllable.

All the stadiums have dedicated legacy plans. The majority feature a range of community facilities, with some set to be repurposed after the tournament.

After the tournament, around 170,000 seats will be disassembled and provided to developing nations to help develop their sports infrastructure.

As many as 22 new stadiums will be created in emerging economies, and this reconfiguration will leave Qatar with stadiums between 20-25,000 seats, which are suitable for its domestic entertainment needs.

Seats will be removed from some stadiums and donated to countries which lack sporting infrastructure – to ensure the tournament’s positive legacy is felt far and wide.

Tournament organizers have pledged to establish the stadiums with modular elements, which will be reconfigured after the tournament to provide a lasting legacy for the 2022 FIFA World Cup far beyond Qatar’s borders.