Facebook wants you to hold your next meeting in VR

Facebook has launched a test for a new virtual-reality remote work app that lets users of Oculus Quest 2 headsets attend meetings as avatar versions of themselves.

For those who don't think Zoom meetings are a good enough substitute for the real thing, Facebook has another idea: a virtual reality app that lets you and your coworkers feel like you're sitting around a table in a conference room.

On Thursday, Facebook (FB) unveiled Horizon Workrooms, a free app for users of its Oculus Quest 2 headset, a device that starts at $299. The app stands out as the company's most ambitious effort yet to enable groups to socialize in VR and move the still niche medium beyond entertainment uses such as gaming.

Workrooms allows up to 16 VR headset users to meet in a virtual conference room, with each of them represented by a customizable cartoon-like avatar that appears as just an upper body floating slightly above a virtual chair at a table. The app supports up to 50 participants in a single meeting, with the rest able to join as video callers who appear in a grid-like flat screen inside the virtual meeting room.

Headset-wearing meeting participants can use their actual fingers and hands to gesticulate in VR, and their avatars' mouths appear to move in lifelike ways while they speak. A virtual whiteboard lets people share pictures or make presentations.

"The pandemic in the last 18 months has only given us greater confidence in the importance of this as a technology," Andrew Bosworth, VP of Facebook Reality Labs, said while addressing a (virtual) room of about a dozen people on Tuesday. He said Facebook has been using the app internally for about a year. 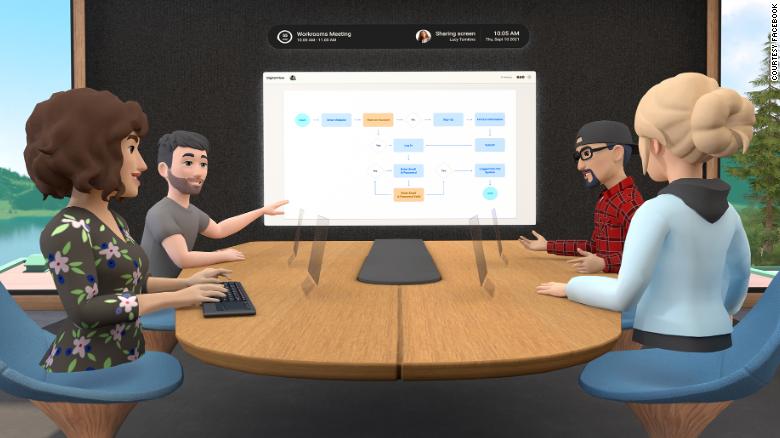 Horizon Workrooms allows up to 16 virtual avatars per meeting, with dozens more people able to join via video conference.

It's not the first time Facebook and its subsidiary Oculus have tried to popularize social interaction via VR. The company launched virtual-hangout apps Oculus Rooms and Facebook Spaces in 2016 and 2017, respectively, which let small groups of users gather in VR. The company shut down both VR apps in October 2019, however. Instead, it announced a virtual social world called Horizon, which was set to be released in 2020. Horizon has yet to appear for most users and Facebook confirmed this week that the app remains in a private beta testing stage.

Workrooms may offer users a sense of what's to come. It shows how far Facebook has progressed in blending hardware and software since its purchase of Oculus in 2014 — and how far it still has to go.

A step forward — but it's not the metaverse, yet

In recent weeks, Facebook CEO Mark Zuckerberg and other tech industry executives have spoken with increasing fervor about visions for a "metaverse." The term draws inspiration from a decades-old dystopian sci-fi idea for a virtual world that provides an escape from the realities of everyday life. Despite its bleak origins, tech executives speak optimistically about what such a metaverse could be, with Facebook going so far as to create a "Metaverse product group" under Bosworth.

Workrooms may look like a step toward a more social virtual world, but it's not quite the picture Zuckerberg has painted.

The app employs a slew of technologies and tricks to make the experience feel as in-person as it can be when you're represented in virtual space by an animated approximation of yourself.

Headset wearers can view their real-life computer screen in VR via an accompanying desktop app. And Workrooms uses a combination of hand tracking and spatial audio — which accounts for room acoustics and makes sounds appear to come from specific directions — to allow users to interact with each other in ways that mimic real life, except for a sound cancellation feature that eliminates background noise. 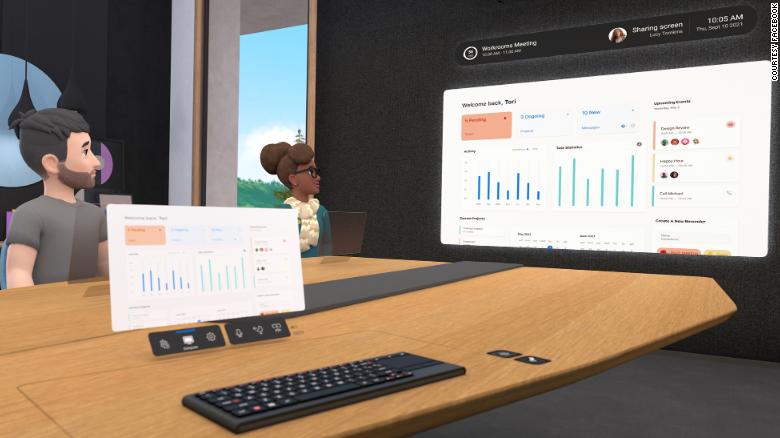 But it's clear Facebook is still working out some kinks. While Bosworth, the Facebook executive, was in the middle of describing how he sees Workrooms as a more interactive way to gather virtually with coworkers than video chat, his avatar froze mid-sentence, the pixels of its digital skin turning from flesh-toned to gray. He had been disconnected.

Even with the rollout of Workrooms, Facebook continues to suffer from some of the problems plaguing VR: it must convince people (or perhaps in this case companies) to buy its headsets, use them regularly, and adapt to new methods of interaction — both with the virtual world and with others within that world — that remain far from perfect.

For instance, while Quest 2 can track hands and even individual fingers — making it possible for users to do things like gesture naturally while talking or flash an okay sign in VR while using Workrooms — if you try to touch both hands together during a VR meeting, it's likely they'll simply overlap in an awkward way that breaks the illusion of reality and presence. 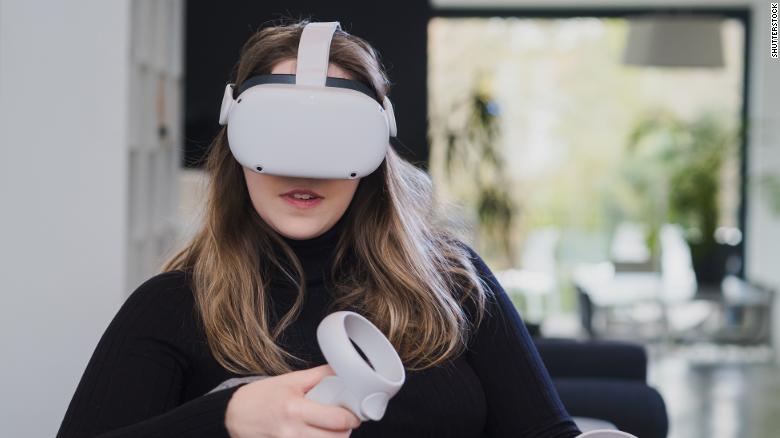 While the app is free, you need Facebook's Oculus Quest 2 headset, which starts at $299, to use it.

Then there's the headset itself. Bosworth said he expects people will use the app for about 30 minutes at a time, and that another team at Facebook is working on improving the ergonomics and weight of VR headsets. The Quest 2 currently weighs a bit over a pound, which may not sound like much but was definitely noticeable throughout the course of a half-hour meeting.

(Facebook halted sales of the headset in late July following a voluntary recall related to reports of skin irritation caused by the headset's removable foam face pad; the company said it will resume selling the headset, this time with a silicone pad cover, on August 24.)
One thing Bosworth noted that the app can't improve on, however, is how engaging meetings are.