COP26: Greta Thunberg tells protest that COP26 has been a 'failure'

Greta Thunberg has told a mass rally in Glasgow that the COP26 climate summit has been a "failure".

The Swedish activist had earlier joined thousands of young people - including striking school pupils - for a march through the city.

She addressed the crowd when it arrived in George Square, saying "immediate and drastic" cuts to emissions are needed.

The march was organised by Fridays for Future Scotland, a group founded by youngsters inspired by Ms Thunberg.

It was one of the largest of a series of demonstrations taking place throughout the summit, which is being held in the city.

Ms Thunberg said: "It is not a secret that COP26 is a failure. It should be obvious that we cannot solve a crisis with the same methods that got us into it in the first place."

She said: "We need immediate drastic annual emission cuts unlike anything the world has ever seen.

"The people in power can cntinue to live in their bubble filled with their fantasies, like eternal growth on a finite planet and technological solutions that will suddenly appear seemingly out of nowhere and will erase all of these crises just like that.

"All this while the world is literally burning, on fire, and while the people living on the front lines are still bearing the brunt of the climate crisis."

Ms Thunberg added: "We know that our emperors are naked."

Activists from several other countries also gave speeches about how climate change is already affecting their homelands.

They included including Vanessa Nakate from Uganda, who said: "Historically, Africa is responsible for only 3% of global emissions and yet Africans are suffering some of the most brutal impacts fuelled by the climate crisis.

"But while the global south is on the frontlines of the climate crisis, they're not on the front pages of the world's newspapers." 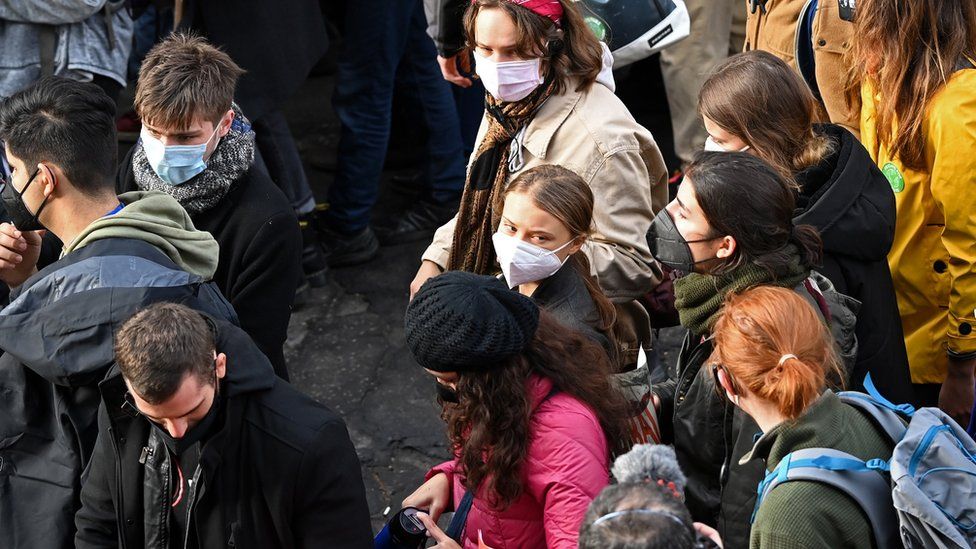 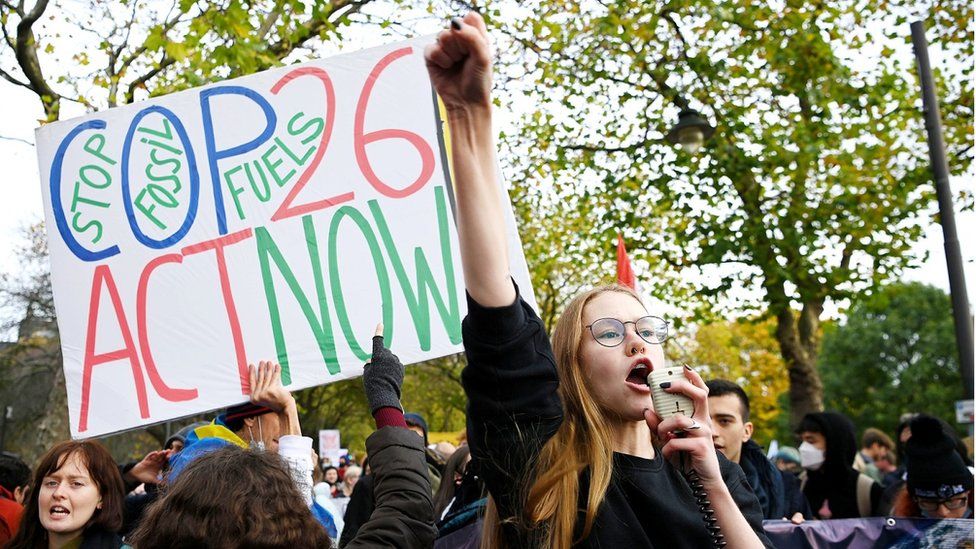 The march began with chants in Kelvingrove Park

The procession marched through the city's west end, past the COP26 site at the Scottish Events Campus, before heading towards the city centre.

It ended at George Square where a stage and speakers had been erected.

Charlie O'Rourke, 14, from Glasgow, skipped school to attend the march with his mother Cairsty and his sister.

He said global leaders at COP26 must "listen to the people", adding: "Don't just go for profit. Listen to what the planet needs."

His mother said she was there for her children and for "the generations to come to just show that something has to happen and it has to happen very quickly".

Finlay Pringle, 14, from Ullapool in the Highlands, travelled by train to Glasgow with his father to take part in the march. 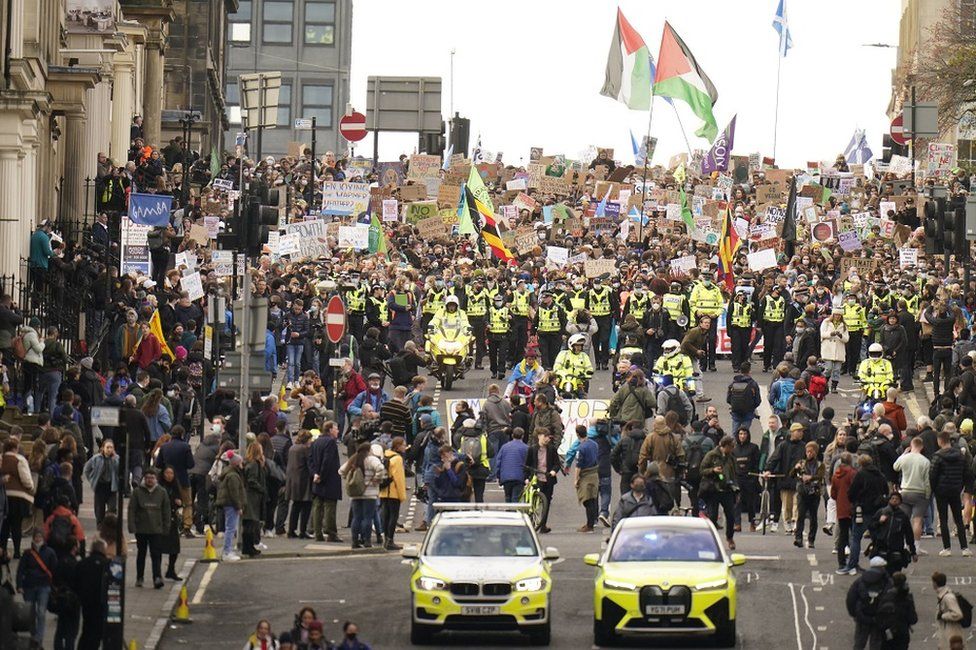 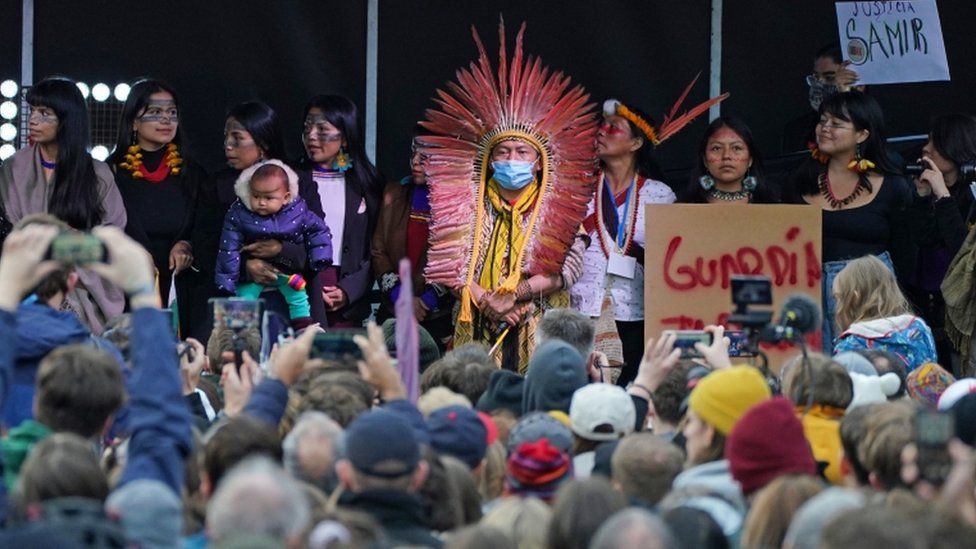 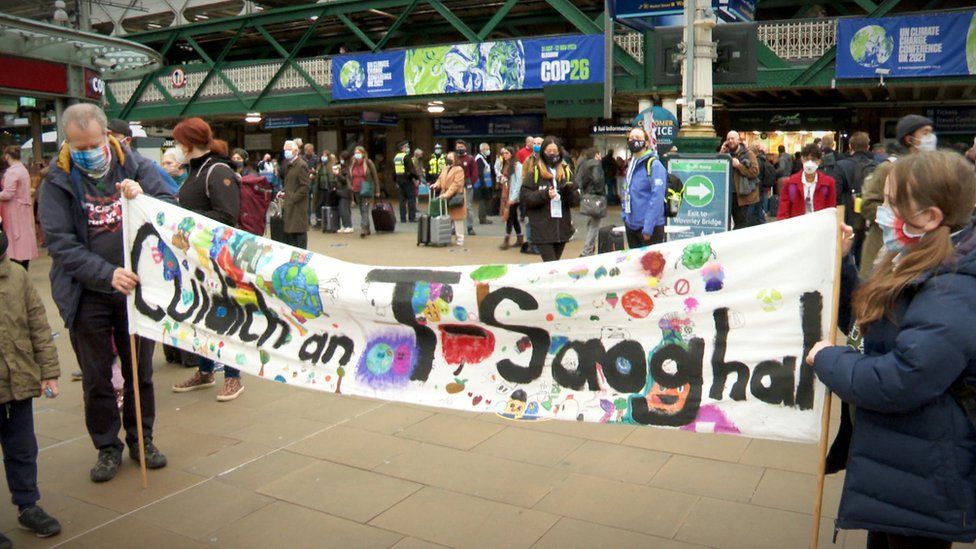 The wider Fridays for Future movement has seen young people around the world striking from school on a Friday to raise awareness of climate change.

Anna Brown, an activist with Fridays for Future in Glasgow, said the event was aimed at demonstrating a need to move climate discussions away from "enclosed" spaces.

She told the BBC: "The message is that the system of COPs - we've had 26 now - isn't working. So we need to uproot that system.

"The message is you need to listen to the people in the streets, the young people, the workers." 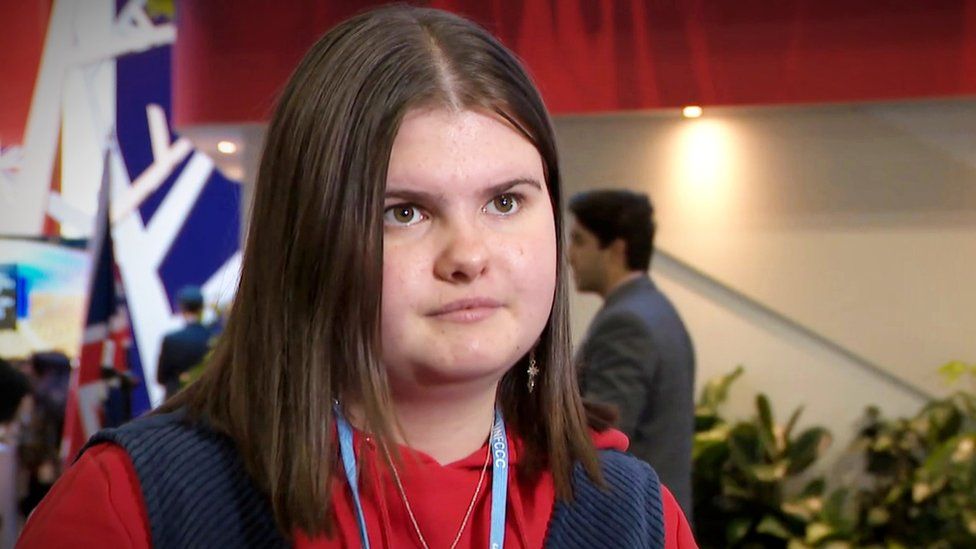 Anna Brown, from Fridays for Future, says the UN climate change summits had failed to deliver

Assistant Chief Constable Gary Ritchie said it was "hugely inspiring" to see thousands young people take part in the "spectacular event" on the streets of Glasgow.

"This was a really important day in the COP26 schedule and we were pleased to be part of such a memorable event for these young participants and for Glasgow," he said.

"Our officers enjoyed engaging with young people, many have children of their own who were taking part in today's march."

He said there has been "positive engagement" between police and protestors during the summit and so far fewer than 20 arrests had been made - mostly for disorder type offences. 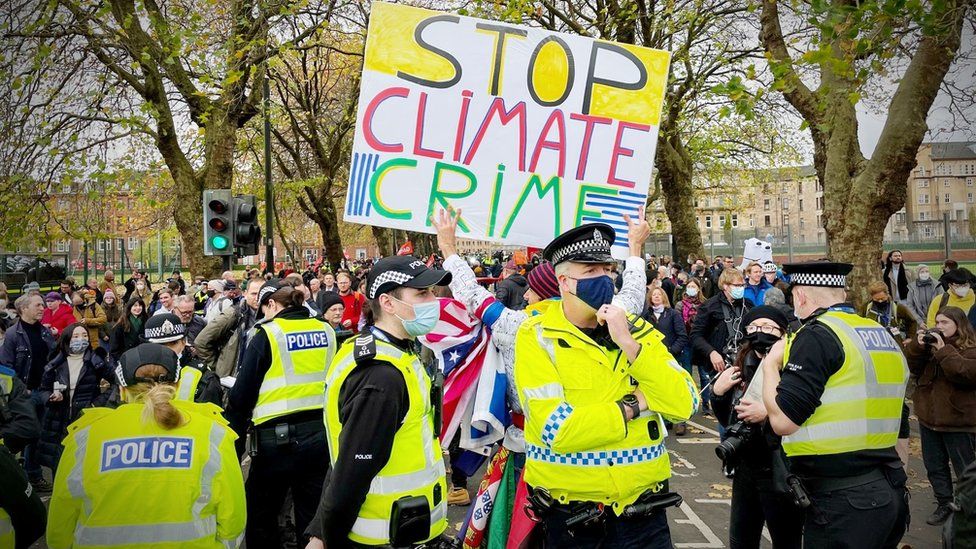 First Minister Nicola Sturgeon said she was committed to "meaningful engagement" between the Scottish government and young people and to involve them in decision-making.

She said: "In Scotland, we are already acting to tackle the climate emergency, but, as we have heard from children and young people this week from Scotland and round the globe, is it not enough and we must do more."

Meanwhile, the Prince of Wales expressed sympathy with the anger and frustration of the young activists in a speech addressing COP26 negotiators, telling delegates the "weight of history" was on their shoulders.

He said he had been invited to take part in the march, but would not be able to do so.

In London, Downing Street said young people missing school to attend the demonstration is "extremely disruptive at a time when the pandemic has already had a huge impact on their learning".

However, Glasgow City Council and most neighbouring local authorities told the BBC that schoolchildren would not be punished for taking part in the climate strike.

They urged parents to let schools know if a pupil would be off for safety check purposes.

Only East Dunbartonshire told pupils they would be marked as having unauthorised absence if they did not attend school on the day of the march.