Some of the few Afghans waiting to enter Pakistan, at the usually busy Torkham crossing 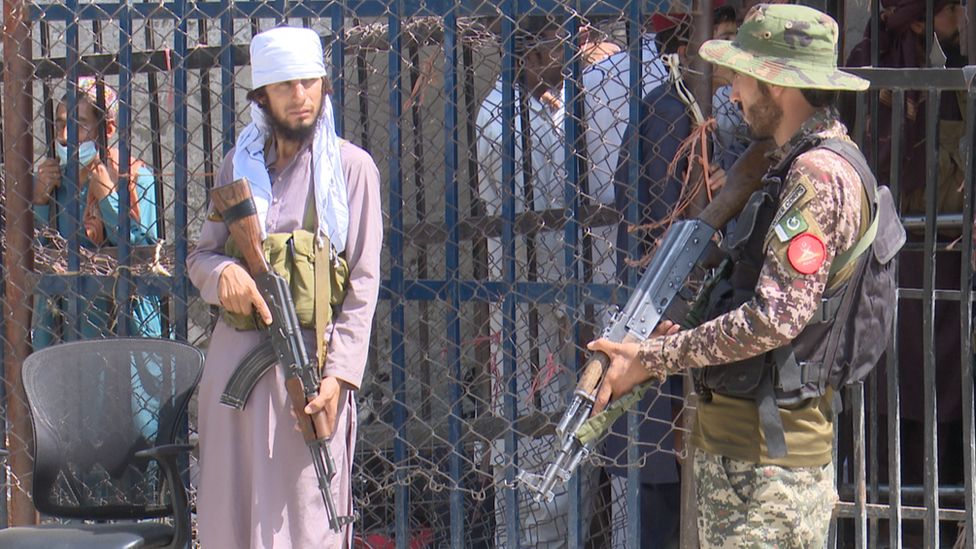 On the surface, it almost looks normal on this part of the Pakistani-Afghan border.

But a closer look would show how much things have changed.

The tricolour flag of the Republic of Afghanistan has been replaced with the white flag of the Islamic Emirates of Afghanistan, and in place of Afghan border security forces now stand gun-holding bearded Taliban militants.

They are now in control of Torkham - the busiest crossing with Pakistan.

A few days back, hundreds of panicked Afghan civilians gathered here for days, desperate for a way out.

Then what seemed inevitable happened: outnumbered Afghan police forces surrendered to the Taliban.

Pakistan, worried about a fighting spillover, had shut its side of the border prior to the Taliban's takeover. But after brief closure it was reopened for trade and restricted pedestrian movement.

Normally, about 6,000-7,000 people would travel between the two countries daily - but today there are hardly 50 people standing on the Afghanistan side to enter Pakistan.

It's taking longer than usual. Pakistani security officials say that they don't want any militants to enter disguised as civilians. That's why they have made the vetting process at the border more strict.

Torkham has been the main point of refugees' influx into Pakistan for decades. 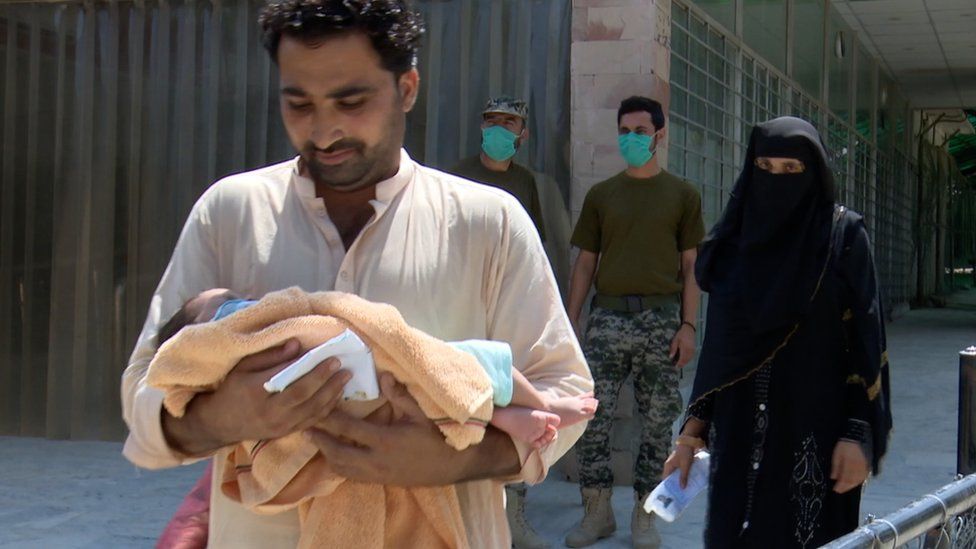 An Afghan man with a baby crosses into Pakistan at Torkham

Now the number of Afghans seeking refuge is much lower.

The Taliban are not letting anyone out. Only traders or those with valid travel documents are allowed to cross.

But it's not the only thing keeping Afghan refugees away.

Amid increasing violence across the border in recent years, Pakistan has been fencing itself off from Afghanistan. All border crossings are now heavily manned, making it impossible for Afghan refugees to enter without government consent.

Just a few metres away from the border, Ahsan Khan, 56, was busy taking out his luggage from a taxi. He was off to the Afghan city of Jalalabad.

"I have been travelling from this border since I was in school. There was a time when my father would take us directly to Jalalabad without any checks," Mr Khan says.

Since June 2016, the Pakistani government has made a valid passport and visa mandatory for all Afghans wanting to cross into Pakistan.

"How can you expect Afghan refugees to come to this border when the people they are trying to flee are standing right here. And where would poor uneducated Afghans get passport and a visa in these circumstances?" Mr Khan asks.

A small market just a few kilometres away from Torkham is frequented by Afghans who had fled to Pakistan.

Owaid Ali owns a small food stall. He says he hasn't seen any Afghan refugees in the market since the Taliban took over the border.

"A few days ago when the Taliban were rapidly taking control of cities, Afghans who came here told me how worried they are at the prospect of living under Taliban rule. But I don't know how will they escape that life now," Mr Ali says.

Almost three million Afghan refugees, half of them unregistered, have been living in Pakistan for decades.

But now the government in Islamabad says it has reached its limit and cannot accept more people from the war-torn country, despite pleas from the UN refugees' agency.