The mysterious Chinese fashion app that's as popular as Amazon

Every night before bed, Anushka Sachan whips out her phone to log into an app.

"It kind of becomes a habit," said the 20-year-old Hong Kong University student. "Before sleeping, I'm just like, 'Okay, check in.'"

The platform Sachan is using belongs to a Chinese brand called Shein — pronounced "She In" — which has rapidly attracted a global army of teen fans on TikTok.

The company is a mysterious online shopping upstart that has made headlines recently for surpassing Amazon (AMZN) in app downloads in the United States, and creating a cult following for its fast fashion apparel sold all over the world. Some experts even say it's beating stalwarts like Zara and H&M at their own game, by making items more quickly and being more digitally savvy with customers. 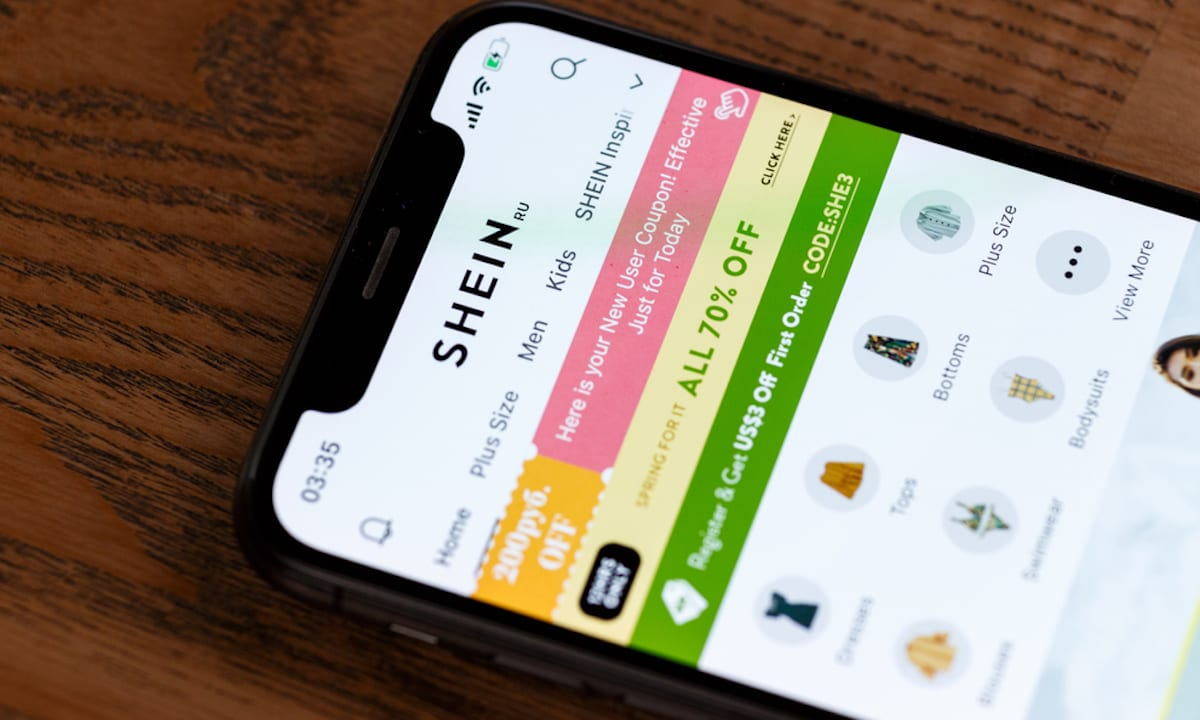 Sachan checks the Shein app daily for the same reason many others do: to get points. The more you get, the more you can save on purchases. Shein awards them to customers for everything from opening the app to watching live streams and entering outfit design contests.

"It is pretty addictive," said Sachan, describing the experience as similar to playing a mobile game.
Shein's ability to lure users to its platform is one of its main ingredients for success, along with its hyper-fast production process, bargain basement pricing and data-driven product offerings.
"I just stopped buying from H&M when I started using Shein," said Sachan, who often scours the site for new accessories and once scored a necklace for 9 Hong Kong dollars ($1.20).
"Because I was getting the same things that I saw at H&M, but like, for cheaper."

Shein was born under a different name — ZZKKO — in China, where it was started in 2008 by Chris Xu. The experience he gained as a marketing and search engine optimization consultant would later prove instrumental in creating the site's powerful algorithm, according to Coresight Research.

At first, the company only sold wedding dresses, said Schmidt. It later branched out to general womenswear, adopting the name "Sheinside." In 2015, the company rebranded again, saying it wanted a name that was easier to remember and search for online.

Fast forward to the pandemic, which has helped Shein generate explosive growth and become one of the few Chinese consumer brands to win global acclaim. As of last October, it was the world's largest online-only fashion company, as measured by sales of goods under the company's own brand, according to Euromonitor International. The research firm declined to provide further information, saying that the finding was part of a proprietary project.

Shein competes with Zara and H&M for customers who want the latest trends for less, and all three companies sell their own branded goods. But the two longtime heavyweights also run brick-and-mortar stores, cater to a wider customer base and sell at slightly higher prices.

Shein's more direct competition comes from the likes of British fast fashion retailers Boohoo and ASOS, which concentrate most of their firepower online, target young female shoppers and tend to offer more affordable items.
In the first half of this year alone, Shein's app racked up more than 81 million downloads around the world. In mid-May, it overtook Amazon as the most installed shopping app in the United States across the App Store and Google Play combined, according to analytics firms App Annie and Sensor Tower.

Shein keeps users coming back to its app by rewarding them for virtually everything, from logging in each day to watching live-streams to entering outfit design contests.

Amazon has regained its crown, although "daily installs between the two apps since then have largely remained close," said Craig Chapple, a mobile insights strategist of Europe, the Middle East and Africa for Sensor Tower.
In recent months, Shein "has really exploded onto the scene," said Schmidt. "Everybody wants [to know] everything that they possibly can about Shein."

They may be disappointed. For all its success, the company is notoriously reclusive, with little known about its inner workings despite its stature as one of China's most valuable privately-held businesses. As of last August, Shein had a valuation of $15 billion, according to PitchBook. By this summer, that had doubled to as much as $30 billion, with annual revenue reaching $10 billion, Bloomberg reported in June, citing unidentified sources.

Shein positions itself firmly as a global business, with an emphasis on distribution: It ships to more than 220 countries or territories. Its website has no mention of its backstory or even where it's based, stating only that it is "an international" firm. In recent months, that has led to some suggestions that the retailer deliberately downplays its Chinese roots amid rising biases and political controversy.

"Given the current climate of geopolitical tensions, it can ... make sense for Chinese entities to lay low," said Matthew Brennan, who writes about Chinese mobile technology and is the founder of research firm China Channel. "They just want to do business. This is something that they don't want to have to deal with. And so I don't think we can blame Shein for taking that option."

The murkiness, however, can be off-putting. Some customers, such as Sachan, have expressed concerns over the firm's lack of transparency around how it produces its goods — and sells them at a low cost — as well as where it sources its materials.

Experts note that the company's approach also makes it difficult to verify its reportedly impressive numbers, though they say that other metrics, such as app downloads, are often solid indicators of a brand's reach, if not sales.

Shein has made a name for itself by blitzing social media users with its affordable and trendy clothing catering to young women, including $6 crop tops and $9 minidresses. Similar to Boohoo and ASOS, the company relies heavily on influencer marketing, teaming up with internet stars and celebrities like Katy Perry and Nick Jonas to expand its reach.

The brand is especially popular with Gen Z shoppers on TikTok, where it has become a trend for users to post $1,000 Shein "hauls," or large purchases. That kind of buzz comes on top of Shein's affiliate marketing programs, which reward influencers handsomely for spreading the word about its products.

The company is also savvy about keeping users on its platform. Last September, it held a virtual fashion show exclusively on its app, which likely helped it pick up more users, noted Lexi Sydow, head of marketing insights at App Annie. Grammy-nominated singer Ellie Goulding was among the performers.

"They're just so far ahead in terms of user experience," said Brennan. "They mix together media and entertainment into the experience, and user-generated content and reviews."

One of its key differentiators, however, is a concept that analysts are calling "real-time retail."

They say that Shein has come up with an in-house algorithm that trawls the web — including its own massive customer database — to find out what fashion items are trending on search, and what people are responding to on competitors' websites.
That data is then used by the design team to develop new items, according to experts. Even in the whirlwind of fast fashion, Shein is prolific: It drops as many as 500 fashion products a day, while Boohoo releases that many over a week.

Shein has also managed to take advantage of China's manufacturing prowess, allowing it to cut down on lead times significantly. Researchers estimate its production schedule is as short as three to seven days, compared to the average span of three weeks disclosed by players like Zara.

That's because Shein's suppliers use the company's back-end software, allowing them to get immediate information on user clicks and orders, according to experts.

"They've integrated their systems with their factory," said Schmidt. "Based off of what is trending, like, what clicks, what sells, what starts to trend ... the algorithm goes to the factory and says: 'Start ordering material, start producing.' So they've essentially cut out all of the middlemen."

Shein is also careful to hedge its bets, only making small batches of each item until demand is proven.

There are sustainability concerns. Like other fast fashion retailers, Shein is eschewed by some customers who worry about the environmental impact of its production processes, while others say the prices are too good to pass up. Sachan, for her part, cited considerations about waste and overconsumption as one reason she now tries to shop less on the app, even as she feels compelled to log in each day.

There's one huge market Shein doesn't have a major presence in: mainland China.

The company hardly markets itself in its home country for various reasons, starting with the headache of having to compete with Alibaba, the longtime industry leader.

"It's not lucrative for them to sell in China," said Schmidt. "[And] these products that would seem cheap to us are not as cheap to [consumers] in their home country."

Instead, Shein concentrates on exports, naming Europe, the United States, Australia and the Middle East as key markets. Shein does not publicly break down what its top markets are.

It has recently also seen momentum in Latin America, with app downloads in Brazil skyrocketing 988% in the 12 months to June, compared to the previous year, according to App Annie.

The brand also remains a fan favorite in India, although its platform was booted out of the country last summer amid a crackdown on dozens of apps. Last month, it returned to India through Amazon's Prime Day shopping festival, leading to excitement among customers.

In some ways, Shein's rise could be compared to that of TikTok, according to Brennan, who authored the book "Attention Factory: The Story of TikTok and China's ByteDance."

"I see so many similarities," he said, reflecting on how the short video app was regarded before it became a global sensation.

"It was viewed as something that was just for Gen Z. It was sort of viewed as frivolous entertainment ... I think the competitors were looking at it similarly, and not taking it as seriously as they should have. And I'm sure that platforms like YouTube and Instagram much regret that now."