• A photo shows 640 people crammed inside a USAF transport aircraft as they try to escape Kabul.
• The jet didn't mean to take so many people, but some pulled themselves on, Defense One reported.
• Audio circulating online seems to reveal an aviation official's reaction to the number of people.

A striking image shows hundreds of people crammed inside a US Air Force cargo plane as they flee Afghanistan after the Taliban takeover.

The photo was obtained by Defense One. A defense official told the outlet that about 640 people were inside the C-17 Globemaster III aircraft. 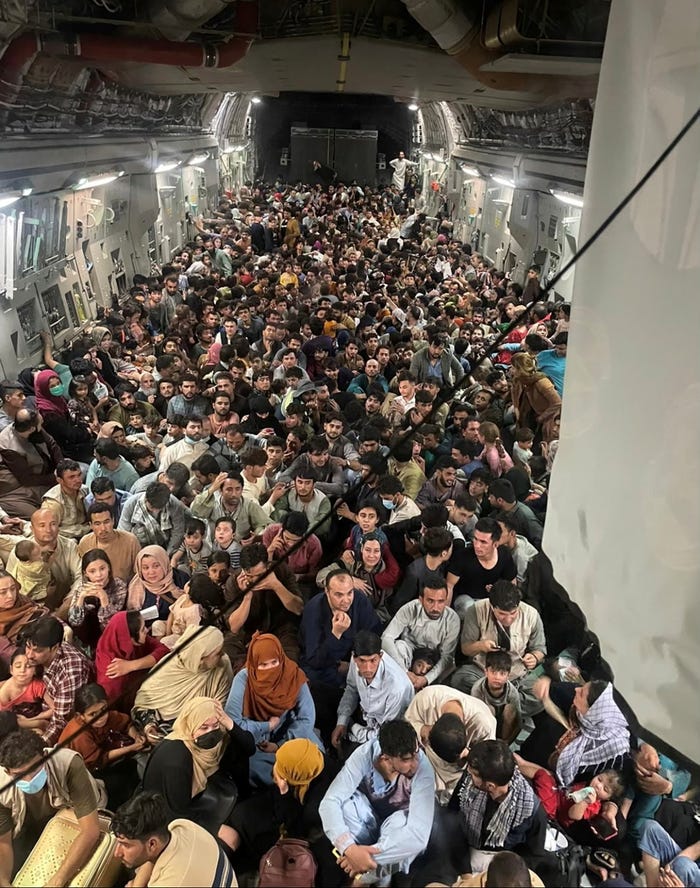 One defense official told Defense One that the aircraft did not mean to take so many people, but that some Afghans who had been cleared to evacuate pulled themselves onto the ramp while it was still half open, and the crew decided to take off anyway.

"That's believed to be among the most people ever flown in the C-17, a massive military cargo plane that has been operated by the US and its allies for nearly three decades," Defense One reported.

The aircraft flew from Kabul to Qatar, the report said.

An audio recording circulating online, cited by Defense One, appeared to reveal an aviation official's reaction to the pilot's estimate of the number of people on board.

"OK, how many people do you think are on your jet? Eight hundred people on your jet? Holy … holy cow. Ok, well, you know, good job getting off the ground."

Insider was unable to confirm the authenticity of the recording, which is being widely shared by open-source air-traffic trackers.

People desperate to flee Afghanistan rushed to Kabul's international airport. People were seen climbing the jet bridge to force their way onto a plane, and another video showed people clinging to the outside of a C-17 in desperation as it moved down the runway.

Other videos appeared to show people who were hanging onto the outside of aircraft falling from the sky.