The Philippines surpassed 2 million Covid-19 cases recently in the middle of its worst wave of infections.

The Philippines topped two million coronavirus cases on Wednesday (Sep 1) as the country battles a record surge in infections that the World Health Organization confirmed is being driven by the hyper-contagious Delta strain.

In recent weeks, daily case rates have hit the highest levels since the start of the pandemic and the health department warned the trend could continue.

Wednesday's official data show the country recorded 14,216 new infections, taking the total caseload to just over two million, with 33,533 deaths in the country of 110 million people.

"It is possible the number of COVID-19 cases will rise some more in the coming days," the health department said Wednesday.

Daily cases exceeded 22,000 for the first time on Monday - more than double the number on Aug 6 when the sprawling national capital region went back into lockdown.

WHO representative in the Philippines Rabindra Abeyasinghe said Tuesday the latest resurgence was being driven by the Delta variant, which has ripped through neighbouring countries.

"More than 70 per cent of the current transmission is attributable to the Delta variant," Abeyasinghe told reporters, citing the results of genome sequencing.

The lockdown in the capital and nearby provinces has been extended until next week as authorities battle to slow the spread of the virus.

But nurses groups complain there is a serious shortage of healthcare workers to look after the increased number of patients after many resigned.

Protesters wearing protective medical gear gathered at the Department of Health (DOH) and held placards demanding their risk allowances and hazard pay, and the resignation of Health Secretary Francisco Duque. 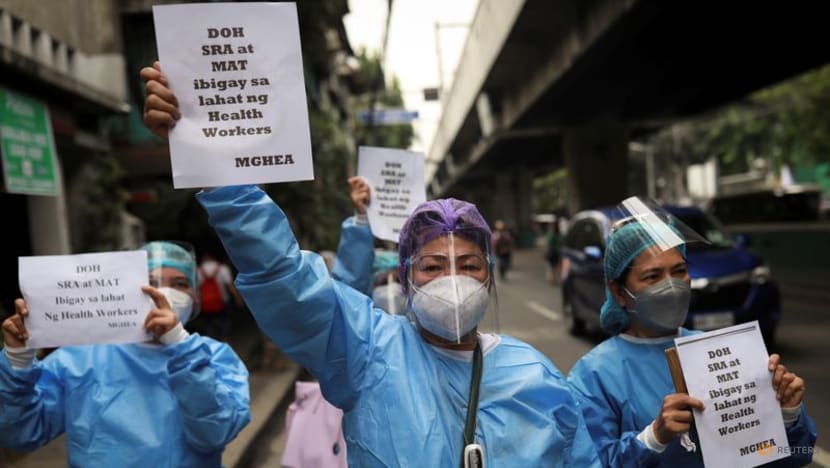 "It is sad that many of us have died, many of us became sick, and many have resigned or opted to retire early, yet we are still kneeling before the DOH to give us our benefits," Robert Mendoza, president of the Alliance of Health Workers, said from the back of a pickup truck.

"The government promised it will give the benefits today but up to now, it has not. I pity us because we are the ones begging," said nurse Nico Oba.

Duterte has stood by health minister Duque during repeated calls for his resignation, the latest after state auditors flagged "deficiencies" in more than US$1 billion in COVID-19 spending.

Duque on Wednesday told Reuters the government was working on the release of benefits but appealed for more time.